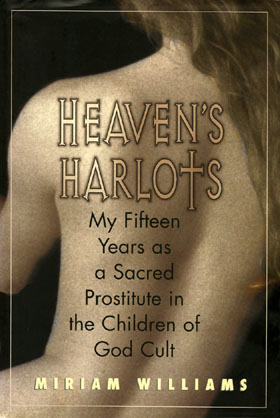 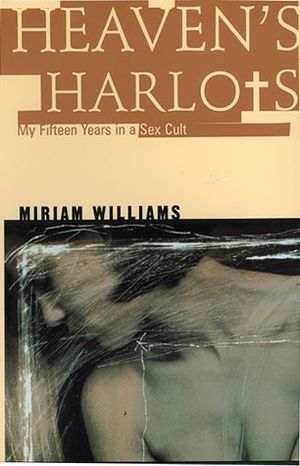 In 1998, William Morrow & Company published Miriam Williams' book, Heaven's Harlots: My Fifteen Years As a Sacred Prostitute in the Children of God Cult, (William Morrow & Company, June 1, 1998). It was reprinted in 1999 with a redesigned cover and new title, Heaven's Harlots: My Fifteen Years in a Sex Cult, (Quill - June 1, 1999).

Why would a mother of five healthy, well-adjusted children write a book about her former life as a sacred prostitute? The question torments me. At age forty-four, I am now on the verge of receiving a master's degree in sociology that will allow me to work and pull my family out of relative poverty. I have no reason to expose myself to the publicity this unusual autobiography could generate. Worse still, I could be undermining the stability that my children now enjoy.

My own life, as you will see, has never been stable. This book relates the story of a girl from Lancaster, Pennsylvania, who fell through the cracks into what became one of the most bizarre sex cults of our time, the Children of God, which at its peak had eighteen thousand members. Numerous documentaries have been made about this controversial cult by the major networks in America, and it has been the subject of various sociological and psychological studies. Celebrities such as Fleetwood Mac's original slide guitarist, Jeremy Spencer, made headlines when he left the popular musical group to join the cult. And River Phoenix, the disillusioned young movie star who died from drug abuse, spent years of his childhood in the Children of God.

The leader of the Children of God, Moses David, has been described by cult expert Dr. Steve Kent as a "lustful prophet," who used the group to unleash his repressed sexuality. Kent writes that the most abused and sexually manipulated people in all the cults he studied were the women of the Children of God, who were instructed to demonstrate God's love by giving sex first to the men in the group and then to the "lost" of the world. According to Moses David, "God was a pimp," and we were the "loving whores of God."

I married twice in the cult and bore five children. Eventually, the ugly weed of child abuse was creeping through the camp. Fearful it might touch my own children, I snapped out of my delusional state and we left the cult for good. But acknowledging previous pain, and accepting responsibility for my actions, proved to be a long and difficult journey back to sanity. I reentered American culture as a forty-year-old single mother who spoke three languages and had been in over twenty countries, but who had never had a checking account, credit line, car, or home of my own. I started work as a waitress at a truck stop to help support my family as I went back to college.

After graduating in June of 1996, I kept a promise I made to myself four years earlier that when I finished college I would write my story. Working without an agent, I photocopied two pages out of a huge directory of publishers and sent off five query letters to editors I chose at random from this haphazardly selected list.

A few weeks later, as I was shopping for groceries, I picked a paperback book off the shelf. Although I had never heard of the book or the author before, I was interested because the cover said it was a true story. The next morning, while sitting on my porch finishing the book, I received a call from one of the editors I had contacted.

"Your letter struck me," said the woman on the phone, "and I usually don't read unsolicited material. Exactly what kind of book do you want to write?"

I wasn't exactly sure, but I found an answer immediately. "Well, I was thinking of writing an honest and personal book, something like the one I'm reading right now."

"Oh, what book is that?" the woman asked.

"The Eagle and the Rose, by Rosemary Altea," I replied, checking the cover to make sure of the name again.

"I edited that book" came the quick response.

My heart jumped into my throat. Coincidences like this one, the equivalent of a one-in-a-million chance, don't just happen. I checked the acknowledgments page. There was her name in the book I had randomly picked up the day before.

Had it not been for that incident of serendipity, I would have not had the courage to continue this far.

But now all my angst and confusion have been transferred from my heart and mind to a computer disk. The unexplainable driving force is gone. I fluctuate between hoping for the best and preparing for the worst. But I decide to keep believing in a higher purpose than I know today.

At present, I am engrossed in literature about the problems of society. As I read stories of bewildered, despairing young adults, I remember my own adolescence and share in their collective pain. Confusion about sexuality and identity prompts many young people to look for solutions through alcohol, drugs, promiscuity, subservience, anorexia, and even suicide. Deeply troubled teens come from all types of families and socioeconomic classes, and upper-middle-class, two- parent homes are affected as much as single-parent homes and households living below the poverty line. We are reminded that our society has to change. I believe that the first step to change is awareness. Each individual must take responsibility for personal actions, but the responsibility often begins with awareness.

This book was written to shed light on one of the escape routes taken by sensitive youth growing up in a troubled society-the path to cult involvement. It is probably one of the most drastic, claims the lives of the most naive idealists, and usually requires the most help along the road to recovery. Unfortunately, there is little knowledgeable help available. While the actions of these people are worthy of contempt, cult members realize that they were motivated by blind idealism.

This is also a story of self-discovery written for those who have lost their self. My journey out of hell came through incremental steps, which were guided by what I can only call fate. Now that I have made it back to reality and can finally lead a normal, fulfilling life, I feel a responsibility, especially to the children born and raised in the cult, to add to awareness of cult involvement. Perhaps one day I can provide practical assistance to ease the transition back to society for others, but for now, I offer hope.