Peter Frouman is an Objectivist Slacker and has a Bachelor of Arts in History (minor: sociology) and a Bachelor of Journalism (News and Public Affairs) from The University of Texas at Austin (currently ranked #7 in "Party Schools" and #10 in "Their Students (Almost) Never Study" by The Princeton Review). After five years at the University, he joined the recovery and support group known as the Texas Exes but there is no evidence that he ever attended any meetings. He has also been ordained as a High Priest of the Repeatership ($30) by the Church of the Subgenius and the Subgenius Foundation Investment Corporation. 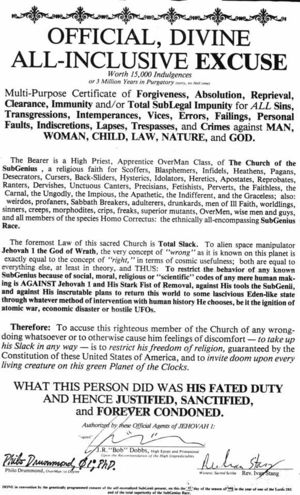 Worth 15,000 Indulgences or 3 Million Years in Purgatory (sorry, no Hell time)

The foremost Law of this sacred Church is Total Slack. To alien space manipulator Jehovah 1 the God of Wrath, the very concept of "wrong" as it is known on this planet is exactly equal to the concept of "right," in terms of cosmic usefulness; both are equal to everything else, at least in theory, and THUS: To restrict the behavior of any known SubGenius because of social, moral, religious or "scientific" codes of any mere human mak­ing is AGAINST Jehovah 1 and His Stark Fist of Removal, against His tools the SubGenii, and against His inscrutable plans to return this world to some lascivious Eden-like state through whatever method of intervention with human history He chooses, be it the ignition of atomic war, economic disaster or hostile UFOs.

Therefore: To accuse this righteous member of the Church of any wrong­doing whatsoever or to otherwise cause him feelings of discomfort — to take up his Slack in any way, — is to restrict his freedom of religion, guaranteed by the Constitution of these United States of America, and to invite doom upon every living creature on this green Planet of the Clocks.

WHAT THIS PERSON DID WAS HIS FATED DUTY

Authorized by these Official Agents of JEHOVAH 1:

DONE in convention by the genetically programmed consent of the self-morealized Subgenii present, on this the 41 Day of the season of ung in the year of one of the Lords 2BX.

Note: any contradictions apparent in this documents are an integral part of the belief system of the Church and are thus entirely non-contradictory.