Difference between revisions of "Berg on Incest"

David Berg, deceased founder and prophetic leader of The Family International, practiced and condoned incest, seeing "man's laws" as a nuisance. Following are excerpts from a number of Family publications where Berg dealt specifically with incest.

Writings on incest from Family publications

10. I REMEMBER MY HEART WAS POUNDING & I WAS ACTUALLY SO EMBARRASSED THAT I DON’T RECALL SAYING A WORD! I think I was almost stunned speechless & even horrified that maybe my Mother was having sexual thoughts about me!—Which she may have been for all I know, & I wouldn’t blame her! Her husband had not been living with her for a long time & she was a woman with a lot of drive, of Jewish background—& Jewesses are notoriously very sexy—& here she was sleeping in bed with a strong virile young man, right next to him on a cold night, & now wrapped around him trying to get warm! She surely must have had some small sensation, if not more, even as I was having!

11. AND PERHAPS IF I HAD NOT BEEN SO CONSERVATIVE & EXTREMELY NARROW-MINDED IN MY THEOLOGY & RELIGION AT THAT TIME & so absolutely frightened by my Mother’s seeming abandon at the moment, I might have reacted a little more responsively & perhaps have satisfied both of us & our tremendous sexual needs, & it could have developed into a beautiful sexual relationship!

52. BUT HERE [IN A DREAM] ON THE FLOWERY BED OF LOVE IN THE GARDEN OF LOVE OUR LOVE WAS FINALLY FULFILLED! Maybe that’s going to be in the Millennium when finally we shall "know even as also we are known" & a lot of things will be different & better & "against such love there is no law." "All things are lawful unto me," the Apostle said, "even though all things now are not expedient." (1Co.13:12; Ga.5:23; 1Co.6:12) They will be then, because we’ll all understand better then.

53. I CAN IMAGINE THAT THEN, PERHAPS THE LOVE THAT I HAD FOR MY MOTHER COULD CERTAINLY BLOSSOM into an even closer relationship sexually if we are so inclined. For as you know, there is sex in Heaven! Not marriage, we shall be like the angels of God, but angels had sex with the daughters of men & still do with me!—Female angels, thank God! (Mt.22:30; Gen.6:2)

8. QUESTION: (MARIA: Is there anything against incest in the Bible?)

ANSWER: Sure, the old Mosaic Law, which is no longer in effect! (Maria: I thought there wasn't anything in the Bible against it?) It's not really clear in the Bible, but there are plenty of man’s laws against it, even the marriage of first cousins! Incest has been known to bring out either the strengths or weaknesses of a family, & it often produces either geniuses or idiots, just like any other inbreeding. With farm animals, for example, you can inbreed in such a way as to improve the line or the strain, or you can do it in the wrong way & make it worse. But with God in control, there's no problem but man's anti-God laws! Cain & Seth obviously married their sisters, & Lot married his own two daughters without any problems!—But watch out for man!

100. QUESTION: My son and I have a very close and loving relationship. Is there a risk of producing abnormal offspring if son & mother make love? Was there a specific reason that it was forbidden under the Mosaic Law?

ANSWER: See question No.8 on incest.

Editor's Note: Christina "Techi" Zerby is Berg's stepdaughter and below is his published fantasy of having sex with her and her mother. Techi was eight years old at the time of publication.

65. AT FIRST I AM A LITTLE CONCERNED ABOUT WHO MARIA MIGHT BE SLEEPING WITH, & that I might be somewhat affected by someone else’s presence in the bed, even as we make love in her dreams. But lo & behold, I am to discover that it is Techi who is sleeping with Maria! Instead of competition, here are both of my two lovely lovers in bed together!

67. THEN I TURN TO TECHI, & SHE TOO IS DREAMING OF ME—her dear old Grandpa-lover! She had always said that when she grew up she only wanted to marry me & have my children! Of course, as there are no longer any such thing as Man's legalistic laws against incest in the loving Kingdom of God, everyone loves everyone & is completely free in His all-encompassing Love! So I make wonderful, sweet, precious love to my now beautiful teenaged Techi! She seems thrilled & delighted with having this wonderful love-dream with Grandpa, excited & satisfied that she has some time, even in her dreams, with her long-beloved Grandpa! (Psa.84:11)

20. (MARIA: WELL WHAT ABOUT INCEST?—THAT’S A BIG BIG QUESTION IN THE FAMILY RIGHT NOW.) Honey, this subject of incest is so dangerous I hardly dare talk about it in the privacy of our own bedroom! I mean the System practically goes beserk when you talk about incest! (Maria: Well, we’ll just have to tell the kids that it’s not prohibited by God, but you’d better watch out because it’s dangerous!) Of course it is!

21. IT IS THE MOST DANGEROUS FORM OF SEX & THE MOST PROHIBITED BY THE SYSTEM!—As far as the System goes & as far as the law goes it is absolutely taboo! Illegal! Dangerous! The System & the Systemites are so absolutely crazy on the subjects they would practically lynch you & string you up & not even wait for a trial or have you arrested or anything, that’s just the way they are!—Insane!

22. IT’S BEEN SO INGRAINED & INDOCTRINATED IN THEM NOW FOR THOUSANDS OF YEARS beginning with the Jews & right on with the Catholic Church. The whole idea that sex is so wicked & sinful, so vile & horrible, so awful & the worst of all sins, & so the worst of all sexual sins is with children. "How could you besmirch & defile & violate your own child?—An under-age minor!"

25. AND MY GOD, YOU DON’T DARE TALK ABOUT INCEST, it’s almost a word you don’t dare even hardly pronounce in private, much less engage in it! You can’t even teach your own children about sex! You can be accused of incest or corrupting a minor or promoting juvenile delinquency or contributing to the delinquency of a minor. I mean there are oodles of all kinds of crazy laws about sex.

69. … There's nothing in the world at all wrong with sex as long as it's practiced in love, whatever it is or whoever it's with, no matter who or what age or what relative or what manner! And you don't hardly dare even say these words in private! If the law ever got a hold of this, they'd try to string me up! They'd probably lynch me before I got to the jail!

110. I'M TALKING ABOUT NATURAL NORMAL GODLY LOVE AS MANIFESTED IN SEX, as far as I'm concerned for whomever! There are no relationship restrictions or age limitations in His law of love. But system laws make it all against the law, and if I'd tell you what I think, I'd probably break the law publishing it! Whew! Wow! The system really stinks! It is a pit of lies and deceit and fiendish propaganda against the laws of God and the love of God and the sex of God! It's almost totally against nature!

Answers To Your Questions! No. 5

51. QUESTION: MY LITTLE BOY (5 YEARS OLD) IS VERY SEXY! He cannot even hug his mother without getting a hard on. So I thought it was bad because it makes him too familiar with his mother if she takes care of him. I believe somebody else would take care of him, but until now, no one in the Home has the burden to do this. What do you, Dad, think of this kind of mother & child relationship? —Sammy, Europe 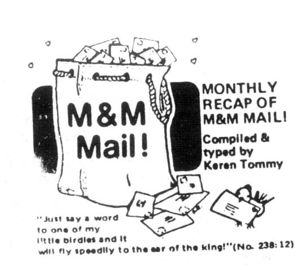 QUESTION: I've been back in the Family four months now and I would like some counsel about lovemaking between father & daughter. When I was living with my parents away from the Family for a while, my father began desiring me & tho' he never asked he would go into the bathroom which adjoined my bedroom & masturbate after he had looked at me lustfully. One night he came into my room & rubbed my legs, hoping I would open up to him. Tho' I feel much compassion for his needs, the thought of making love with my own father leaves me cold. I've really been seeking the Lord's will, asking for you to write something on this. I have asked a sister to FF my father & she said she would try. The relationship between my mother & father is not very good. (Keren Tommy says, 'I feel asking a sister to FF him is the best solution to these problems, according to your faith?') — N.: Brazil.
(Mosaic Law is dead! Try Mt. 9:29 & 22:39.-D.)