Difference between revisions of "Cherish Lloyd"

Cherish Lloyd (also known as Cherish Ety) was born into the Children of God in England on September 15, 1974. During her childhood, she lived in Children of God Homes in Germany, Italy, Peru, Ecuador, Chile, Brazil and Mexico. In a 1993 interview with Columbus Dispatch reporter Robert Ruth, Lloyd recalled experiencing severe physical abuse while growing up in The Family: "If you'd cry for your parents, they'd come in and beat you. I remember black eyes and bruises all over." 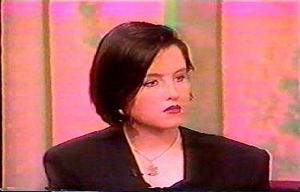 After a failed attempt to escape the cult at age 13, Lloyd finally managed to leave The Family in 1991 and went to live with relatives in the United States. After several Family Homes in Argentina were raided by police officials in September 1993, Lloyd traveled to Argentina to visit her siblings Sam and Angelina Lloyd, then being held in protective custody, and try to get them to leave the organization. In October 1993, she appeared on Telemundo's Maria Laria show with her siblings, her mother, Carole Lloyd, Thomas Edwards, a spokesperson for the cult, journalist Leonardo Shocron, Hector Walter Navarro, a lawyer and expert on The Family, and two other former second generation members, Abigail B. and Joyanne Treadwell Berg.

In the years after leaving The Family, Lloyd worked as a photographer, graphic artist and journalist. Lloyd attended Ohio State University (OSU) where, in 2000, she earned a Bachelor of Fine Arts degree in Photography and New Digital Media. She reportedly completed the five year program in only three and half years.[1] Her senior project was on her experiences growing up in The Family and attendance at her presentation was reportedly higher than at any other presentation of a senior project at OSU in the preceding 20 years.[2]