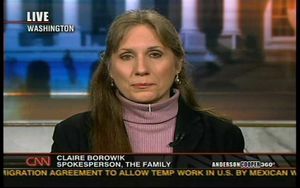 Claire Borowik (Canadian; also known as Susana Clara Borowick) was born 1960 in Burlington, Ontario. She is currently the official spokesperson for The Family International.

Ms. Borowik has described the atmosphere of The Family International's past similar to that of "a nudist colony," where sexual freedoms were taken for granted. She cites scholars who have said the sexual practices appeared to cause no harm to children.

Ms. Borowik has repeatedly and adamantly denied any responsibility by the group in Ricky Rodriguez's murder–sucide.

She was married to Cacho de Sabbatos. In the past she served as a Family leader in Argentina.