Difference between revisions of "Joel Wordsworth" 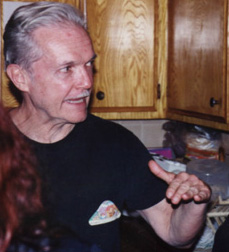 Joel Wordsworth is a first generation ex-member of the Family International/Children of God, and one of the cult's early Bible teachers.

Wordsworth was excommunicated by David Berg in 1975. In a Mo Letter titled The Uneager Beaver Berg said:

74. I'VE RECENTLY HAD TO EXCOMMUNICATE JOEL WORDSWORTH because his words were no longer worth what they used to be. From the time he forsook his interest in publishing MO Letters in the Northwest U.S. three or four years ago, when he was doing so well, he began to go astray.

75. JOEL BECAME MORE INTERESTED IN PUBLISHING HIS OWN WORDS and peculiar interpretations and strange doctrines than the Words of the Lord, and from that time on he began to be deceived for rejecting the Lord's Truth. For a long time we just ignored his wild ideas and hoped he'd repent and come to his senses after several gentle rebukes and chidings, but instead he grew steadily worse.

76. AT FIRST I JUST SAID, "LEAVE HIM ALONE. MY SHEEP KNOW MY VOICE, and a stranger they will not follow. Those who follow him are not my sheep, so it's best to get rid of them anyway. Give him enough rope and he'll hang himself--he'll expose himself and his false doctrines and disloyalty to God's Words, and the sheep will see who's right."

78. BUT FINALLY HE BEGAN TO EXPOSE HIMSELF BY DEFYING THE WORD OF THE LORD and openly condemning some of the latest Letters and contradicting and twisting their truths so blatantly despite many warnings, so that we had to excommunicate him from receiving them at all. He is now busy defying authority and going about the Colonies sowing further discord amongst brethren.

79. SO WE HAVE HAD TO NOT ONLY EXCOMMUNICATE HIM BUT ALSO EXPOSE HIM AND WARN YOU OF HIM.--As we shall with any others who defy the Words of the Lord. To neglect them and replace them with other words is almost as bad.

A Question About "The Uneager Beaver!"

82. Another question that came up was in regards to the MO Letter "The Uneager Beaver" (ML #352, printed in 1975). You might recall that in that Letter Dad got very upset about a story that a Family member wrote. So we asked the Lord if He could have Dad explain to us how the counsel in that Letter applies today, and what the difference is between that story and the stories that were printed recently in the Zine, for example, that were not exactly spirit stories.

83. (Dad speaking:) Okay, how does that counsel in "The Uneager Beaver" relate to the things that the Lord's pouring out to the Family today? Well, dear Family, that Letter was good and helpful, and it was very good counsel. You might not recall the details of that Letter very well, but there were a lot of reasons why I was upset and disappointed with that story. For one‚ they had titled the story "Moses David's Squeeze Don't Jerk Color book," when in reality the story didn't contain one word of the MO Letter. It was supposed to be a parable based on the message of "Squeeze‚ Don't Jerk‚" but the overall message of the story was moderation. It was lukewarm, a horrible compromise, and nothing at all like the message of "Squeeze‚ Don't Jerk." In the Letter "Squeeze, Don't Jerk," I'm telling you to go slow, so even the whole theme of the story was off, and they had missed the whole point of "Squeeze, Don't Jerk."

84. Then not only that, the story itself was stupid, ridiculous, silly, unscriptural, frothy, insipid and a total waste of time! It was about a lazy beaver wandering around in the forest wondering what name he should call himself. Just the setting in itself is completely ridiculous and couldn't be further from the truth. When have you ever seen a lazy beaver? They just don't exist! And why would a beaver be wandering around in the forest wondering what to call himself when he'd already been named by Adam?! So the whole foundation, the starting point of that so-called parable, was false; it was a lie. That story was not inspired by the Lord, it was inspired by the Enemy!

85. The children's pub team at that time had spent hours and hours and hours preparing that ridiculous story and illustrating it to the hilt. But when I saw it, when it was sent to me for final approval, it was clear that all their time and effort and energy had been wasted. It was a total loss! And then, to try to pass that stupid story off as a MO Letter, as the Word of God, was an insult, a slap in the face to me and the Lord! We wanted to feed our children the Words of the Lord, the MO Letters, the dreams and visions and stories that the Lord had given me in the Letters—the true Words from the Lord. So for that pubs team to waste their time and energy and effort on something so shallow and false exposed their lack of spirituality and depth in the Lord.

86. Yes, I was furious at that time, but it was not because somebody took the time to write a story. It was because somebody took so much time to write, edit and illustrate a story that was a lie, that wasn't even based on good, sound, spiritual principles and the truth and the Word of God. And then they had the gall and the nerve to put a MO Letter title on it and credit it to me, calling it "Moses David's Squeeze Don't Jerk," so that all the children would have read that silly story and put it on par and given it as much credibility as the stories that they read in the MO Letters! It was ridiculous, and it was a trick of the Enemy to lead the children astray and to weaken their faith in the Word of the Lord and the parables of Jesus and the MO Letters.

87. We've printed stories for the children and the young people in recent years that weren't necessarily spirit stories, they weren't received in prophecy, but they were still good stories. They were inspired by the Lord and based on sound spiritual principles‚ based on the Word. They weren't a figment of somebody's crazy imagination‚ or worse yet, inspired by the Devil.

88. Just because we're now receiving spirit stories—stories from our Heavenly helpers, dictated from the Heavenly realm—doesn't mean that the stories printed earlier that were written by Family members or others are not good, or that there's anything wrong with them. The Lord is allowing you to receive stories now from the spirit world via prophecy because there's such a great need, and that method is so much faster. You also don't have to be gifted with writing ability, and you don't even have to be in WS. Anybody in the Family who has the faith and the burden can now receive stories and help to feed our children.

89. So I hope that helps to answer your question and bring things into proper perspective, so you don't criticize the stories that have been printed in the past—even the not-so-distant past, in the Zine, for example—just because they aren't exactly spirit stories. They're still good stories based on the truth with a lot of good, sound, Scriptural lessons. But now one of the Zine editors, Jasmine, has become one of our spirit story writers, and I'm sure she would testify that receiving stories from beyond via prophecy is faster, more efficient, and a much better method.

90. It's a new day! The Lord is doing new things. There's a greater need today. We need these stories. We need that extra news from Heaven, and we need these things that the Lord is pouring out. We weren't quite ready for Heavenly stories back in 1975. Timing is important. Now it's a new day, and the Lord's doing all kinds of new things. And the key in that statement is the Lord! The Lord's doing new things! He's the One that's inspiring these stories! He's the One that's pouring them down. He wasn't the one pouring down or inspiring "The Uneager Beaver" story. So that's the difference. (End of message from Dad.)

91. (Mama:) So there you have it! The Lord is doing a new thing! This project is ordained and designed by Him‚ and it's going to accomplish His purpose of feeding and inspiring our children—and all of us! If the Lord is calling you and putting the burden in your heart to become a channel and let the Heavenly storytellers beam down their messages through you, then please take the time to stop and listen, and open your mind and heart and receive what they have to give you. And all of you can pray and ask the Lord to help and anoint those who are receiving and working on preparing and publishing the stories! There's so much coming down the Heavenly pipeline‚ and we'll be trying our best to get it to you as quickly as we can! Thanks for your prayers and your participation! I love you!

Joel was always serious about physical fitness -- nearly as serious as he was about the Word. He typically wore a tight-fitting white t-shirt with kakhi pants; his hair was dark, kept short and combed straight back; he usually had a small ghotee. At the Ranch, I used to see him early in the morning, before most people were up, jogging, doing chin-ups, push-ups, and other exercises while reviewing his memory verses (he knew probably 1000's of individual Bible verses, as well as dozens of whole chapters, and, I think, even a whole book or two!). In those days, leadership did not "fraternize" with the rank and file, following Berg's example, who believed that "familiarity breeds contempt".

The most common remarks made by students in Joel's prophecy classes (his specialty) were "Wow!" and "Heavy!" -- but few could tell you what he said, much less what he meant when class was over. As someone once pointed out, the measure of a leader in the early COG was his ability to deliver a rebuke -- to cut someone to shreds with the Bible. In this sense, Joel was very much a man to be feared!

In a 1977 interview in Christianity Today titled "The Children of God: Disciples of Deception" former member Jack Wasson likened the excommunication of Wordsworth to "kicking the Bible out of the COG". He went on to explain, "practically all of the Bible lessons in the COG were written by Joel Wordsworth. Now his writings are contraband. The point is that COG theol­ogy is now based entirely on the MO letters."

Presently, Wordsworth is a frequent poster on the NewDayNews.com (NDN) message boards, where, more than thirty-years after leaving the cult, he attempts to convince others that Berg is still alive and that his prophecies have yet to be fulfilled, frequently attempting to link Bible verses with Berg's Mo Letters. In his postings at NDN, Wordsworth and his wife Carmel describe a still living Berg as being held captive by Karen Zerby and Steven Kelly.