From XFamily - Children of God
Revision as of 05:55, 29 May 2019 by Peter Frouman (talk | contribs) (add youtube video of Larry King appearance)
(diff) ← Older revision | Latest revision (diff) | Newer revision → (diff)
Jump to:navigation, search
A checked version of this page, approved on 29 May 2019, was based on this revision. 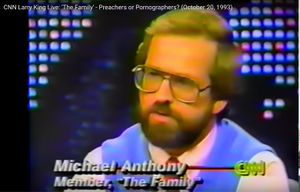 In a Family publication dated July 1989, Michael Hawron recalled in detail how he beat and terrorized his son "James" with a "big plastic" cane before personally escorting him to an illegal "Teen Detention Home" in Macuau where "James" and other children were subjected to further abuse for long period of time. Others sent to the same facility included David Berg's granddaughter, Merry Berg. In a 1995 UK child custody case ruling, Lord Justice Ward described the treatment of children at this facility as "a form of torture", "barbaric and cruel" and "a form of physical and mental atrocity mercilessly dished out to young, often already emotionally damaged children."