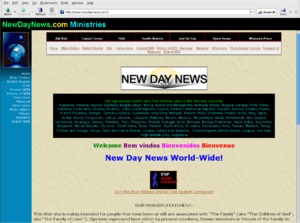 NewDayNews.com is a website for former members of The Family and its primary is former first generation members.

NewDayNews.com currently features several message forums, a resource section, and a large collection of photos. In early October 2008, the operators of the site announced they planned to shutdown the service on December 19th, 2008 and that it will then continue indefinitely as a read-only archive site.