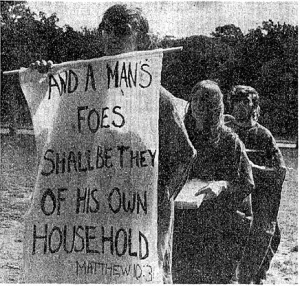 By JAMES T. WOOTEN
Special to The New York Times

MINGUS, Tex., Nov. 24 — Although the boy who calls himself Adonikum was born but 20 years ago, there is a loneliness in his eyes that is older than human history, and when he speaks, his soft words echo the accumulated desperation of the species.

"It is easy to know when you are not wanted," he said rather sadly here yesterday as the first serious winds of the winter sliced across the barren prairie around him. "What is not so easy is to leave."

But however difficult it is, leaving is an experience for him and the hundreds of other members of the Children of God, a youthful, rigidly Fundamentalist group of Christians who believe the universe is on its last legs and who have left family, friends and society behind in their retreat to isolated communes scattered from this west Texas hamlet to Canada, Mexico and Europe.

Recently some new dimensions of alienation were added to the lives of many of the group. Parents in Texas and in California, angered by their children's departure to the sect, have set out on a course of energetic opposition. The group's principal benefactor has evicted members from communes here and in California.

Finally, this week, the organization announced that despite its belief in the New Testament counsel that anyone who does not hate his parents cannot be a disciple of Jesus, many Children of God will be going home for the holiday season.

The sect had its origins. among a small group of conservatives within the Jesus Movement, a nationwide Fundamentalist movement among youth, and served only as a reactionary facet of that group until early 1970, when it mushroomed into a full-fledged sect.

Louis Ingersoll, who edits the Children of God newsletter, says the group now has 2,000 members in 39 communes in seven countries. Until late last summer, the bulk of the American membership was in Texas and southern California, but there now appears to be a general migration to colonies and camps in the Northwest.

Some observers who have watched its evolution are now persuaded that the recent rash of problems has dealt a mortal blow to the group. Adonikum quietly disagrees.

"What is happening to us is nothing new for the Children of God, " he said, shivering in the wind. "We know that by doing the will of Jesus we run the risk of rejection — He was despised and rejected, a man of sorrows and acquainted with grief — but we also know that His spirit is among us and will not leave us alone, and that is what is important."

"Amen," said a boy who calls himself Ecclesiastes.

"Amen, praise Jesus," intoned a boy who calls himself Hamath.

The three were part of a grimy rear guard of the 250 members who left a 350-acre ranch-commune near here over the last month. Some of them headed for new quarters in Dallas and Fort Worth, 100 miles away, but most of them went to a new encampment near Seattle, where they joined many others who had been similarly displaced from communes in southern California.

In their new sites, they hope to resume the ascetic, miniminal life style they believe to be patterned after the earliest disciples of the Christian faith. The Children of God eschew tobacco, liquor and premarital or extramarital sex, devoting themselves within their nearly self-sustaining communes to chanted prayers, hymns sung ecstatically, an almost constant study of the Bible, meditation and conversing in languages that they say come to them through prayer on the spur of the moment.

Like most of the devotees of the dozens of other youth cults that have arisen over the last decade, most of the Children of God are from white, middle class families. Most are in their early 20's, and all are convinced that society is beyond repair and must be forsaken by the true believer in Jesus Christ.

Each of them adopts a Biblical name on his entrance into the sect. Although many members are married to other members of the sect, there are few children. Day in and day out, the mood of their communes is somber and grim, and laughter is a scarce commodity. Their support has been mainly from parents and individuals sympathetic to their pursuit.

Their problems began in August when a group of adults in the San Diego area, chagrined by their children's membership in the sect, formed an organization called The Parents Committee to Free Our Sons and Daughters from the Children of God.

By mid-September, the committee had persuaded the Rev. J. Fred Jordan, a wealthy television evangelist in Los Angeles, who is the principal benefactor of the sect, to denounce it publicly and to ask its leaders to leave the communes he had provided near Coachella, Calif., a desert community not far from Palm Springs, and at the ranch he owns near here.

In protest, about 40 members at Coachella, 100 in a skid row house in Los Angeles and 60 living at a dilapidated 32-acre dairy farm in the arid, brown sandy hills near San Diego, chose to leave along with their leaders. The same decision was reached in late October by the members of the commune here.

Mr. Jordan, a native of the desolate sprawling land through which the muddy Brazos River aimlessly meanders, said he had no quarrel with the members, just the leaders; and the parents on the new committee said they had no objection to the sect's literalistic beliefs, but rather to the control exercised by it leaders.

"These people are anti-government, anti-religion and anti-schools," said William M. Rambur of Chula Vista, Calif., whose daughter, Kay, joined the Children of God last summer and refused to go home when he came here to get her.

Later, Mr. Rambur, a retired Navy officer, found that his 22-year-old daughter, who calls herself Comfort, had gone to Seattle with many of the others from the commune here, and he went there to try to persuade her again to go home.

"I don't know what kind of hold they have on those kids," said Mr. Rambur. "I think it's some kind of mass hypnosis or witchcraft. "

There are several similar stories of parents who tried to retrieve their children, but a barber in Seattle was apparently one of only a few who were successful.

The daughter of a Long Island couple joined a commune in Texas, where her mother visited her several times last summer. In August, the girl was transferred to the Los Angeles colony, where her father spirited her away in an automobile.

She escaped at Phoenix, and three. weeks later the father received a postcard from Scottsdale, "Daddy," his daughter wrote, "you really shouldn't have tried to kidnap me. I'm still working for my Lord and my brothers and sisters, Please do not try to get in touch with me ever again."

Another committee leader is Ted Patrick, Gov. Ronald Reagan's minority affairs director in the San Diego area. Mr. Patrick, whose son is a member of the sect, believes all of the members were "hypnotized into joining" and charges that drugs are common in the group.

The leaders of the sect accuse Mr. Jordan, the television preacher, of using the Children of God for monetary gain. They say he asked and they consented to appear on his television program, after which he made appeals for money.

"We never saw any of it, " said one spokesman for the group.

The leaders also denied the parents' charges that members are taught or persuaded with drugs or hypnosis to detest their parents and forsake their families.

Perhaps in response to the parents' criticism, Mr. Ingersoll, speaking for the new Dallas colony of about 75 young people, said Monday that the "2,000 members of the Children of God in 39 communes in seven countries will start for home this week."

"God led us to take this drastic step," said Mr. Ingersoll, who calls himself Abel. "It is a test of our disciple-ship and to prove once and for all that we are not the victims of hypnotism, brain-washing, drugs, kidnapping or coercion."

Some members, he said, will remain home over the Christmas holidays, and some may stay at the communes. "It will be their decision, " he said.

The Dallas colony was formed by a few members of the commune that was closed here by Mr. Jordan. The Dallas colony is headquartered in an unheated building in a run-down part of town, and its principal activity is to publish the sect's international newsletter. It is to these quarters that Adonikum, Ecclesiastes, Hamath and the dozen or so other youngsters left behind here will eventually go.

But for now, the immediate task for them is to repair a variety of old vehicles parked on the property of Randy Bennett, a 30-year-old, affable, wealthy rancher who befriended the group before its eviction because "as far as I could tell, they just wanted to be left alone, and that's sort of how I am too."

By midafternoon, the boys' hands were black with the dirt and oil from the various motors on which they had been working throughout the day. The wind had increased substantially, and ft was now sweeping unchallenged over the rolling hills, stirring the mesquite and the sagebrush, cutting like a scalpel through the boys' clothing.

Adonikum embraced himself and rubbed his hands, before pronouncing what was for him a benediction to the day.

"Out here, I found everything that I wanted except love, which is really what I wanted, " he said. "With the Children of God, I found love, and so can anyone else who wants it. Out there I felt that love did not exist. Here, it is all around me."

Are you going home for the holidays? he was asked,

"If my parents send the money," he said as he walked toward a great blue bus that rested stolidly on its axles, tumbleweeds bouncing off its flattened tires.