From XFamily - Children of God
Revision as of 02:59, 16 December 2007 by Thorwald (talk | contribs) (+California)
(diff) ← Older revision | Latest revision (diff) | Newer revision → (diff)
Jump to:navigation, search
A checked version of this page, approved on 18 August 2008, was based on this revision. 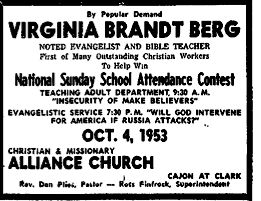 Rev. Virginia Lee Brandt Berg (née Nina Virginia Lee Brandt[1]) was a Christian evangelist, and mother of David Brandt Berg. She is the daughter of Rev. Dr. John Lincoln Brandt and Nina Lee Marquis, and wife of Hjalmer Emmanuel Berg. She was born on May 27, 1886 in Ronceverte, West Virginia and died on March 15, 1968 in California. She descended from German immigrants who settled in America in 1745.[2] She was related to Robert E. Lee, the Civil War general.[2]

As young woman, she was engaged to be married to Bruce Bogart, a relation of actor Humphry Bogart. At the engagement party she meet a young Swedish immigrant, Hjalmer Emmanuel Berg, who was hired to entertain the crowd. Hjalmar was "saved" by his father-in-law and started studying theology in Des Moines, Iowa.[2]

In 1913, she gave birth to their first child, Hjalmar Jr. Shortly after she slipped and fell and broke her back in two places.[3] While recovering she had a religious experience and claimed that she had been divinely healed. Mr. and Mrs. Berg's newfound Pentecostalism caused them to be thrown out of their church. They instead became freelance preachers. Mrs. Berg later became a relatively famous American Pentecostal preacher.[2]