From XFamily - Children of God
Revision as of 05:35, 18 January 2012 by Jprobillard (talk | contribs) (→‎People)
(diff) ← Older revision | Latest revision (diff) | Newer revision → (diff)
Jump to:navigation, search
A checked version of this page, approved on 18 January 2012, was based on this revision.

World Services (or WS) was a collection of secretive, undercover homes or "units" primarily handling finances, publications, and special projects (e.g. Creations) in The Family International.

WS operated under very surreptitious conditions, even from the rest of the group. Such units were often heavily subsidized or fully supported by funds allotted them formerly by David Berg, and now Karen Zerby and Steven Kelly. Members of such units are taught they are the crème de la crème, since they are specially selected for their talents, trusted with very sensitive information, and their units were or are directly answerable to Berg or Zerby.

Most WS members were required to clock a minimum of 48 hours of work per week (this number occasionally changes).

WS maintained many separate units globally prior to approximately 2003 or 2004 when all WS members relocated to 3 main locations in Albuquerque, New Mexico where Karen Zerby and Peter Kelly also lived and worked. After Ricky Rodreguez's murder/suicide of 2005, all WS relocated to Chapala, Mexico where they took up the rent of 4 large properties (Karen Zerby and Steve Kelly also personally purchased a pair of condos at "Manzanilla" for vacationing purposes.

In late 2010, after the "Reboot" had been published to the rest of TFI, WS underwent the "WS restructuring" in which essentially most WS members (many of them older WS members with health problems and families with children) were "let go", the WS structure itself was downsized, one property was let go and another smaller one rented and nearly rebuilt to accommodate the many apartments that were needed, and many of the remaining WS members moved out to rent their own apartments with stipends paid for their work for WS.

At the same time as the "WS restructuring", the London "home" and separate warehouse and print office used for printing publications was closed down, the board structure that had been in place in TFI until that time was shut down and the various International Boards (aka "IB teams") that had been operating from within the WS units were shut down along with most of their initiatives.

Some peculiarities of WS living were as follows:

Many Family publications were copyrighted under the name "World Services". 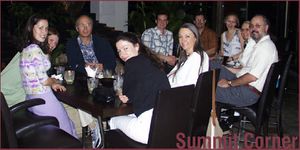 - Finance Manager of The Family International since the 1970s
- Aliases: Shemariah Books or Elliot

- an official representative of The Family International
- Canadian

- one of the prime editors of all material leaving WS in the 1970s and early 1980s as well as head of the Publications Department. He left the cult in 1981.

- David Berg's chief "theologian" and prime editor of WS publications until 1999. Has since left the cult
- American

- a former illustrator for "True Komix". Berg appointed him head of The Family's Art Department in 1981. He left the cult in June 1990

The following is an incomplete list of past and present locations of WS units and sub-units. Due to the extremely expensive and time-consuming aspect of moving a unit, they usually avoid trans-locating. As a result of this, many of these units remain in the same area for many years.