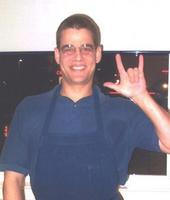 Zion Scepter Horwitz (aka Deaf Zion, Timothy, Mark) (1974-2003) was stabbed several times in his residence in Dallas, Texas on New Year’s Eve, 2003. Zion’s body was discovered about one hour later by his two deaf roommates. He had lost a considerable amount of blood so that by the time he arrived at the hospital there was little that could be done, and he passed away while undergoing surgery.