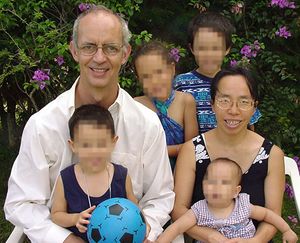 Christopher Carruthers or Christopher Jones (born 3 December 1951; British), the son of a British Army officer. Educated at public school in Cheltenham, he studied drama at Rose Bruford College in Kent, but dropped out to join the Children of God in 1973.

Mr. Carruthers is a current, longtime member of The Family International, last known to be living in Africa (Kampala, Uganda) with his third wife Yoshiko Carruthers and children.

He is known in the group as Simon Peter or Happy, and was the host of Music With Meaning from 1976 to 1984 using the name Simon Peterson. Appearing on numerous spoken Family audio products his voice is widely recognized in The Family.

Three of Mr. Carruthers' daughters, Celeste, Kristina, and Juliana wrote a book about their upbringing in the cult.