A sex cult stole my childhood 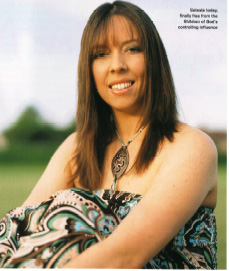 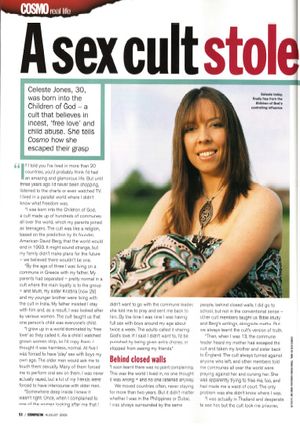 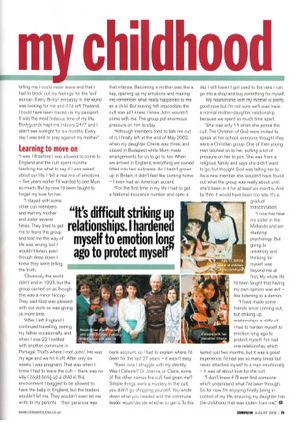 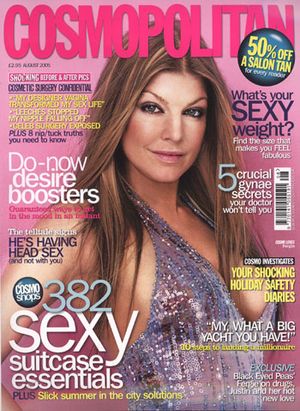 Celeste Jones, 30, was born into the Children of God - a cult that believes in incest, 'free love' and child abuse. She tells Cosmo how she escaped their grasp

"If I told you I've lived in more than 20 countries, you'd probably think I'd had an exciting and glamorous life. But until three years ago I'd never been shopping, listened to the charts or even watched TV. I lived in a parallel world where I didn't know what freedom was.

"I was born into the Children of God, a cult made up of hundreds of communes all over the world, which my parents joined as teenagers. The cult was like a religion based on the prediction by its founder, American David Berg, that the world would end in 1993. It may sound strange, but my family didn't make plans for the future – we believed there wouldn't be one.

"By the age of three I was living on a commune in Greece with my father. My parents had separated – pretty normal in a cult where the main loyalty is to the group – and Mum, my sister Katrina [now 29] and my younger brother were living with the cult in India. My father insisted I stay with him and, as a result, I was looked after by various women. The cult taught us that one person's child was everyone's child.

"I grew up in a world dominated by 'free love' as they called it. And as a child I watched grown women strip, so I'd copy them. I thought it was harmless, normal. At five I was forced to have 'play' sex with boys my own age. The older men would ask me to touch them sexually. Many of them forced me to perform oral sex on them. I was never actually raped but a lot of my friends were forced to have intercourse with older men.

"Somewhere deep inside I knew it wasn't right. Once, when I complained to one of the women looking after me that I didn't want to go with the commune leader, she told me to pray and sent me back to him. By the time I was nine I was having full sex with boys around my age about twice a week. The adults called it sharing God's love. If I said I didn't want to, I'd be punished by being given extra chores, or stopped from seeing my friends"

"I soon learned there was no point complaining. This was the world I lived in, no one thought it was wrong – and no one listened anyway.

"We moved countries often, never staying for more than two years. But it didn't matter if I was in the Philippines or Dubai, I was always surrounded by the same people behind closed walls. I did go to school but not in the conventional sense – other cult members taught us Bible study and Berg's writings, alongside maths. But we always learn the cult's version of truth.

"Then, when I was 13, the commune leader heard my mother had escaped the cult and taken my brother and sister back to England. The cult always turned against anyone who left, and other members told me communes all over the world were praying against her and cursing her. She was apparently trying to free me, too, and had made me a ward of court. The only problem was she didn't know where I was.

"I was actually in Thailand and desperate to see her but the cult took me prisoner, telling me I could never leave and that I had to block out my feelings for the 'evil' woman. Every British embassy in the world was looking for me and if I'd left Thailand, I could have been traced via my passport. It was the most hideous time of my life. Bodyguards kept me indoors 24/7 and I didn't see sunlight for six months. Every day I was told to pray against my mother.

Learning to move on

"I was 18 before I was allowed to come to England and the cult spent months teaching me what to say if I was asked about our life. I felt a real mix of emotions – five years earlier I'd wanted to see Mum so much. But now I'd been taught to forget my love for her.

"I stayed with some other cult members and met my mother and sister several times. They tried to get me to leave the group and told me the way of life was wrong, but I wouldn't listen, even though deep down I knew they were telling the truth.

"Obviously the world didn't end in 1993, but the group carried on as though this was a minor hiccup. They said God was pleased with our work and was giving us more time.

"After I left England I continued travelling, seeing my father occasionally, and when I was 22 I settled with another commune in Portugal. That's where I met John*. He was my age and we hit it off. After only six weeks I was pregnant. That was when I knew I had to leave the cult – there was no way I could bring up a child in this environment. I begged to be allowed to have the baby in England, but the leaders wouldn't let me. The wouldn't even let me write to my parents – their paranoia was that intense. Becoming a mother was like a key, opening up my emotions and making me remember what really happened to me as a child. But leaving felt impossible; the cult was all I knew. I knew John wouldn't come with me. The group put enormous pressure on him to stay.

"Although members tried to talk me out of it, I finally left at the end of May 2002, when my daughter Cherie was three and stayed in Budapest while Mum made arrangements for us to go to her. When we arrived in England, everything we owned fitted into two suitcases. As I hadn't grown up in Britain, it didn't feel like coming home – I even had an American accent.

"For the first time in my life I had to get a National Insurance number and open a bank account, so I had to explain where I'd been for the last 27 years – it wasn't easy.

"Even now I struggle with my identity. Was I Celeste? Or Joanna, or Claire, some of the other names the cult had given me? Simple things were a mystery. In the cult, you didn't go shopping yourself. You wrote down what you needed and the commune leader would decide whether to get it. To this day I still haven't gotten used to the idea I can go into a shop and buy something for myself.

"My relationship with my mother is pretty good now but I'm not sure we'll ever have a normal mother-daughter relationship because we spent so much time apart.

"She was only 14 when she joined the cult. The Children of God were invited to speak at her school; everyone thought they were a Christian group. One of their young men latched on to her, putting a lot of pressure on her to join. She was from a religious family and says she didn't want to go, but thought God was telling her to. As a new member she wouldn't have found out what the group was really about until she'd been in it for at least six months. And by then it would have been too late. It's gradual indoctrination.

"I now live near my sister in the Midlands and am studying psychology. But going to University and thinking for myself was beyond me at first. My whole life I'd been taught that having my own opinion was evil – like listening to a demon.

"I have made some friends since coming out, but striking up relationships is difficult. I've had to harden myself to emotion long ago to protect myself. I've had one relationship, which lasted just two months, but it was a good experience. I've had sex so many times but never attached myself to a man emotionally – it was all about love for the cult.

"I don't know if I'll ever find someone who'll understand what I've been through. So for now I'm enjoying finally being in control of my life, ensuring my daughter has the childhood that was stolen from me."