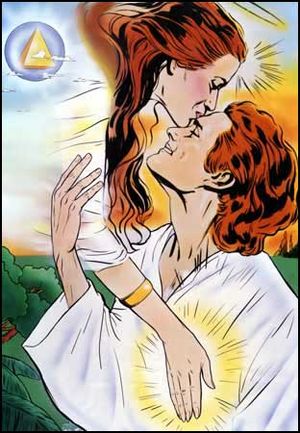 Our story begins back in 1979 when Clair came home one day just bubbling with excitement! She told her brother, John, all about an experience she'd had that gave her more joy, love and peace inside than she'd ever known!--To his amazement, she told how she had met Jesus, by simply asking Him to come into her heart!

As the months went by, John saw his sister grow stronger and firmer in her beliefs and convictions. He had to admit that some of the things she showed him from the Bible were fascinating, especially the prophecies about the Future. But even though he was amazed and impressed at how accurately the ancient Prophets had described the World of the 20th Century, he couldn't quite bring himself to humbly pray to Jesus and ask Him to come into his heart.

It wasn't long until Clair decided to give her life full-time to telling others about God's Love. She joined the same group of missionaries that had told her about the Lord and was soon halfway around the World, happily and busily sharing the Gospel with others in a Third World country!

When the Great Economic Crash struck the World, the chaos and confusion that rocked the nations greatly affected both John and Clair's lives!--He lost his job, was unable to keep up payments on his apartment and couldn't buy any gasoline for his now useless automobile! However, Clair became busier than ever, teaching and comforting the people of the country she was in, who hungrily looked to her for help and answers!

As nation after nation fell into anarchy, tension between the Superpowers reached an all-time high as they accused each other of being behind the turmoil. America and Russia both prepared for a direct military confrontation, and the World came very close to full-scale nuclear war!

So it was not surprising that when a bold 7-year plan for peace was proposed at the United Nations, that it was immediately accepted! A new One-World Government was formed, led by the genius who had drawn up this peace agreement. During the first 3-1/2 years of his rule, peace and stability returned to most countries.

But 3-1/2 years after coming into power, this leader of the One-World Government suddenly broke his peace pact, invaded Israel, erected a computerised Image or Idol of himself at the Jews' new Temple in Jerusalem and proclaimed that he himself was God!--And that all the World must now worship him and receive his credit mark or number in their foreheads or hands in order to buy or sell!

John suddenly recognised that this powerful World leader was the evil "Beast" or "Antichrist" in the Bible's predictions of the Endtime that his sister had shown him years earlier! He remembered the Scriptures' warning of damnation to all who received the "Mark of the Beast" brand of 666! After several sleepless nights he decided to refuse to accept the Mark! Charges of treason were being levelled against all who would not receive it and government agents began rounding up all such rebels, giving them a final chance to take the Mark or be executed!

John narrowly escaped the government police who came searching for him! He got out of the tightly-controlled city, fleeing deep into the nearby mountain forests where he found a cave. Though often cold, hungry and sick, he managed to survive and stay alive in these primitive conditions for over three years!

Till one day he was startled by a blinding flash of light from the sky and a thunderous sound that roared from the heavens! He dove to the ground and covered his head, expecting the shock and blast of a nuclear explosion to hit him any moment!--After a few minutes he cautiously looked up to see the most shocking sight he had ever seen: There in the clouds was the brilliantly glowing figure of a Man!--And many others were rising up from off the Earth to be with Him! Soon the entire sky was filled with countless figures, until suddenly, they all vanished into the sky!

Another incredible sight appeared in the heavens: A huge blue coloured sphere with a large glowing golden Pyramid inside of it! Just about a month after it had first appeared, John was shocked to see a flood of fiery meteors pour out of the Pyramid, raining on and completely destroying the city that he had fled from in the valley below!

Then another flood poured out of this wonder in the sky!--Billions of people mounted on great white horses came flying out of the Pyramid down to the Earth! In terror, John fled deep into his cave, having no idea who or what these alien Invaders were or what they wanted! Several days later when hunger drove him out of his hiding place and he was gathering berries, suddenly a shining rider from the sky landed right in front of him! The Invader looked into his eyes and said, "You have not worshipped the Beast nor received his Mark, therefore you are safe.--You have nothing to fear, for we are here to help you." With that the mounted stranger took off into the sky!

In the months that followed, John could hardly believe the changes that took place all around him!--The weather changed to a lovely warm temperate climate! All of the thorns, thistles and poisonous plants of the forest died, as did the mosquitoes, flies and other pests that had bothered him before! Once, to his astonishment, he came upon a family of mountain lions that were resting and grazing on grass along with a doe and her fawns!--All of the animals had become vegetarian and were no longer afraid of each other nor of him!

One day another of the flying Invaders came upon him!--Only this time, it was someone he personally knew--Clair! He was so happy to see her he burst into tears! After listening to John's story about all he had been through, she comforted and reassured him that he was safe now and that a wonderful New Age had begun! She then told him her story, how the Antichrist and his World Government had warred against the country that she was in, and how God had protected and used her to lead thousands of people to Jesus!

She then went on to describe the wonderful transformation her body went through when Jesus returned to rescue and resurrect all of His saved children! She explained how she went to God's great Heavenly Space City and told John about some of the Heavenly wonders there in that beautiful crystal-gold 1,500-mile high, wide and long Pyramid in the sky!--And how Jesus and all of His people had flown out of the City on Heavenly horses to destroy the Antichrist and all of his cruel followers and to set up the Kingdom of God on Earth for 1,000 years of peace and plenty!

"If I'd only received Jesus when you first told me about Him," John said, "Then I'd be a supernatural citizen of that wonderful Flying City like you are!"--"Well, at least you received enough of the Truth to recognise the Antichrist and to refuse his Mark", Clair replied.--"And if you learn to love and live for Jesus now, during this New Age, you can still become a translated Super-Citizen of His Super-City!"

After leaving John with these words of comfort and hope, she laid her hand on his bosom to pray for him, and his worn and weakened body was immediately healed and strengthened!--Then with a loving kiss she bade her brother farewell until tomorrow, as she miraculously flew back to the Heavenly City!

Although much of this amazing story is set in the future, according to Bible Prophecy, all of these shocking events will soon take place! (See Isa.11:4-9; Dan.7:17-27; 8:23-25; Mt.24; 2Thes.2:1-12 and Rev.11-13,19-21)--Will you be ready for the rise and 7-year reign of the bestial Antichrist and his One-World Government?--If you receive Jesus now, you'll have the power to defy and resist this Satanic dictator and his soul-damning Mark and you'll be able to help many others find God's Love and Salvation!--Like Clair did! Then you'll be ready to meet Jesus when He returns to gather His Own and take them to a great Victory Celebration in His Heavenly City before returning to destroy the Antichrist's forces and set up His Kingdom of Love on Earth!

You can receive Jesus into your own heart right now by simply praying this little prayer: "Dear Jesus, I believe that You are the Son of God, and that You died for me. Please forgive me for all my sins. I now open the door of my heart and ask You, dear Jesus, to please come into my heart and give me Your free Gift of Eternal Life!--In Jesus' name I pray. Amen."