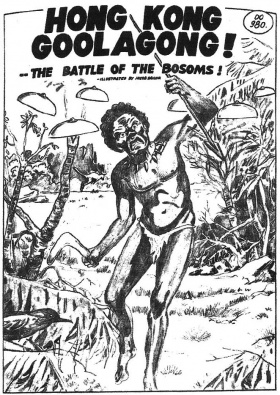 Hong Kong Goolagong is believed by The Family to be a sexually ambiguous Australian Aboriginal hitchhiking demon who attacks Christian missionaries who bring the advances of Western civilization to dark-skinned people and Aborigines in particular.

The name “Goolagong” was revealed by David Berg in a coughing fit where “every cough was a word and … every word was shaped like a nipple with all the nerves running up to the nipple.” Berg described the 1981 “demonic attack” as similar to being overwhelmed by smothering female breasts.

The name Goolagong is shared by Evonne Goolagong Cawley, winner of the 1971 and 1980 Women’s Wimbleton tennis championships, who is also of Aboriginal heritage.

The following is excerpted from "Hong Kong Goolagong!–The Battle of the Bosoms!" (DO 980), published in 1981.

27. LOOK HOW THAT ATTACKED ME IN MY SLEEP! It's like we were going through this jungle & this hit me in the throat, it kept trying to come up in my throat & choke me to death! I don't want any more Goolagongs! That word sounds familiar. Have we ever heard that word before? (Maria: Not that I know of. Are there lots of demons that can do that? Like the Lord gave us something on Ashraf, that he was a god of war that had tried to choke you before. Are there other demons that try to do the same things?)

28. OH HONEY, THAT'S ONE OF THE MOST COMMON FORMS OF DEMONIC ATTACK IS BY CHOKING! (Maria: So they all like to try it, huh?) I've heard of many, & those who've studied anything about demonology, know that many people choke to death by demons! I've seen it personally in several cases, particularly in Pennsylvania & Canada where they've got lots of Witchcraft. Pennsylvania is rife with Witchcraft! And up in Northern Canada where the Indians lived & worshipped devils, it was just full of demons! Our children need to know those things are real! They're real powers that they have to fight & battle in Jesus' name!

83. HONEY, DO YOU BELIEVE ME? (MARIA: OF COURSE!) ILY, Sweetheart! All I know is it happened, I can't explain it. I don't have to explain it, do I? (Maria: Oh no!) That's all I know: "Hong Kong Goolagong! Must be buried very deep, some place his spirit keep. His spirit must be bound, where he can't be found! Hong Kong Goolagong!" It was just like a chant. Isn't that funny?

84. WE WERE WALKING THROUGH THE FOREST OR THE JUNGLE TO THIS BURIAL GROUND & he'd gone into something & we had to bury it there. What could they have done to have called up his spirit? Huh? (Maria: Made him mad maybe with Sharuhen, our only Aborigine disciple, going to see her mother, wanting to go back & minister in the Interior to the Aborigines. She said she was going to go pretty soon & minister to them.) Oh, that's something! Well, I hope somebody warns her that those things are very real & she'd better not fool around! (Maria: Dangerous business!) Yes, a real fight!

85. I WAS ASKING A QUESTION: BUT WHAT HAS IT TO DO WITH HONG KONG? It was just like his people had come from Hong Kong. Well, the Blacks spread from Africa across the islands, but the Shemites across the mainland like Chinese & Indians. The Indians, you know, some of them are quite black too. The blacker they get, they get that strange look in their eyes. She's still got a tiny bit of that fear.

86. IT'S ALMOST SCAREY TO LOOK INTO SHARUHEN'S EYES, have you noticed? It's like she's been liberated, but just sort of newly so, you know?--That there's still the characteristic, sort of inherent, born in, like she's looking out of deep darkness. Like I said once about Davidito: They've come out of such darkness! They still look at you sometimes like they're peering out of the dark into the light!

87. BUT YOU TAKE INDONESIA & ALL THOSE ISLANDS JUST ABOVE AUSTRALIA, the East Indies, a lot of them are pretty dark. So maybe some could have come from the Mainland, huh? See, Mainland Hong Kong is just north of those islands. Even some Filipinos are pretty dark. Or could it be because it was on the Hong Kong tape or something? But that seemed like what I got when I was wondering. It's pretty farfetched, but anything's possible in the realm of the Spirit! Honey, you've got to eat!

110. "THE BATTLE OF THE BOSOMS"! I wonder if that's got anything to do with denipplisation? They were all cut-off bosoms! I remember one of them was trying to choke me! Come to think of it, I think they do have some jungles in Australia! There was jungle in that film we saw about the alligator hunting around Darwin, & up around the Darwin area are where most of the Aborigines live. The more I think about it, Goolagong was a female demon! We couldn't even dream up a thing like that, it's so far out!