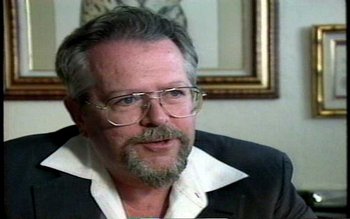 Reverend J. Gordon Melton, Ph.D. (both John and James have been used as his first name) is the director of the Institute for the Study of American Religion and is a research specialist with the Department of Religious Studies at the University of California, Santa Barbara. He is listed as an expert on The Family International by said cult, and has defended them for many years.

Melton has frequently been labelled as a cult apologist, as he often works for such groups (including terrorist cult Aum Shinrikyo [1], many of whose leaders were later sentenced to death by Japanese courts) through cult-funded research projects and books or as an expert witness.

In the mid 1990s, Melton was heavily involved in a British custody case involving The Family. He testified on behalf of the group and helped them defuse the inevitable damning indictment of the previous abuse of children in the group. He was also very involved in the creation of The Family's Charter and has made no secret of the fact that he dreamed of single-handedly bringing the group into the mainstream.

Countercult activist Anton Hein and others have often criticized Melton because of what they consider excessive skepticism of the testimonies of former members of new religious movements. The following is excerpted from expert testimony for the Local Church in its lawsuit against Spiritual Counterfeit Project:

DR. MELTON: When you are investigating groups such as this, you never rely upon the unverified testimony of ex-members.
MR. MORGAN: Why?
DR. MELTON: To put it bluntly, hostile ex-members invariably shade the truth. They invariably blow out of proportion minor incidents and turn them into major incidents, and over a period of time their testimony almost always changes because each time they tell it they get the feedback of acceptance or rejection from those to whom they tell it, and hence it will be developed and merged into a different world view that they are adopting.

In 1986, before his later turnabout defense of the cult, Melton wrote the following regarding the Children of God (as The Family International was then known):

"The sexual manipulation in the Children of God has been so thoroughly documented that it is doubtful whether the organization can ever, in spite of whatever future reforms it might initiate, regain any respectable place in the larger religious community." — J. Gordon Melton, "Encyclopedic Handbook of Cults in America", pg.158 (1986). ISBN 0824090365

"One new set of letters, Sex Questions and Answers (1979), provided the opportunity to reiterate the positive perspective on sex that had become so integral to the Family. The new dialogue on children and sexuality was initiated in an autobiographical treatment of Berg's own developing sex life. Using himself as an example in My Childhood Sex! Doing What Comes Naturally (1978), he wrote that pre-pubescent children should be left alone to discover and experience sex naturally so that by the time they hit puberty, they would undergo a smooth transition into their teen years. "If you were already accustomed to it, there wouldn't be any big deal about it, nothing new! It's only natural!" He also recalled that his Mexican babysitter used to stroke his penis to relax him so that he would take his nap—apparently a widespread Latin practice at one time.19

19. This practice can hardly be described as an adult-child sex act as has been hinted at in some anti-Family writings. It offered no sexual satisfaction to the adult and had as its object the speedy drifting to sleep of the child. Alex Comfort, in his 1982 book More Joy of Sex (New York: Crown Publishers), documented this old custom: "Male babies, incidentally, get erections early on and nursemaids used to quieten them by bringing on the nearest thing a baby can contrive to orgasm. Some pediatricians now say this over stimulates the child: at a later stage it would do, so we can't give an opinion as to whether it's wise or not, but since many primitives masturbate babies, it's most likely harmless, and the baby appears to like it" (p. 13.)" [2]

He is the Director of the Institute for the Study of American Religion which has a specialty in the study of new religious movements. He has written extensively on the subject and his expertise is unquestioned. He first became aware of the Children of God some time around 1970 and had his first direct contact with them in 1971. He monitored them through the 1970's until they closed their colonies and their headquarters and the majority of members left the country. After some years of being out of touch he was unexpectedly approached in the Autumn of 1992. He was provided with copies of the literature as he requested. He visited homes of The Family in 1993. One was in rural England which I assumed to be the Ward's present home. He also stayed at homes in Eastern Europe and Paris as well as in California. Frankly professing no special training in psychology or child care, Dr Melton nonetheless reported that he consistently found happy children who were comfortable in the presence of a stranger and who were openly affectionate with the grown-ups in their midst, especially their own parents. He observed nothing to indicate that any child abuse was occurring in any of the homes which he visited. He found the youth quite knowledgeable of the world around them and remarkably free of criminal and drug related behaviour. Many were bilingual and multi-lingual and all were comfortable speaking to strangers and speaking before an audience. Many had developed specialised skills with modern technological equipment (especially the computer) and had an excellent musical background. Females lacked any marked interest in fashion and most males had little interest in professional sport though some followed soccer.

His report dealt at length with the sexual freedoms granted by and practised in accordance with the Law of Love. When cross-examined he felt able to go further than he had in his written report and his evidence was clear and unequivocal namely that he was in no doubt at all that oral or manual masturbation and full sexual intercourse had occurred between child and adult within The Family and that the incidence of this having occurred was higher in The Family than outside it. He said that Peter Amsterdam had in a roundabout way acknowledged that fact. He described Amsterdam as an astute politician and apologist and a staunch defender of the family. He revealed that there had been much conversation among the leadership about the extent to which Berg himself had participated in child sexual abuse and there was some disquiet as to how he could hold himself out to be the Prophet when he was morally flawed.

Dr Melton stated that he had a reputation for being a defender of small religious groups and a defender of the freedom of religion. Nevertheless he was not afraid to voice his criticisms of The Family and he did not shrink from expressing his horror at the excessive punishments meted out to the children. He assisted the Official Solicitor by providing literature from his archives which had not been forthcoming from The Family. I found him to be independent and objective and his views on the future of this group, to which I will turn in due time, command respect.

Payment received from The Family

Additionally, The Family funded and edited Melton's 1994 book about the cult, Sex, Slander, and Salvation, and currently advertise it on their website. [3]


Books on The Family by J. Gordon Melton