Difference between revisions of "Hugo Westphal" 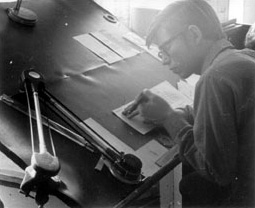 Hugo Westphal (American; also known as Eman Artist or Al Eastman), grew up in Texas and was a longtime Mo Letter artist, especially known for illustrating the FFing Mo Letters.

Hugo Westphal was married to "Genesis". When it was discovered that their baby's skull was fractured, David Berg accused Genesis of being a witch and claimed it was her fault. It was later found that Hugo had abused the baby in a fit of anger.

There have also been a number of cases of alleged child molestation by Hugo Westphal.

He was eventually excommunicated due to lascivious behavior and repeated offences of severe physical abuse against women and children (see "Dad's Birthday Message!" DO 877, Feb. 1980), but he was later reinstated and remained in The Family into the 1990s, before leaving again. After his final departure, The Family continued to use his artwork and have often hired him to produce artwork for them from outside the group (see Grapevine #10).