From XFamily - Children of God
Jump to:navigation, search
CAUTION: This article contains graphic descriptions of child abuse and may be disturbing for some readers. 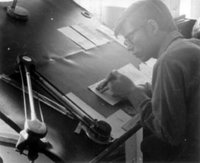 Hugo Albert Westphal, Jr. (U.S. citizen; born January 9, 1950; pseudonyms include Eman Artist, Snowy, and Al Eastman) grew up in Texas and was a longtime Mo Letter artist, especially known for illustrating the Flirty Fishing Mo Letters. He was last known to be living in Dallas, Texas.

Hugo Westphal was also married[1] to "Genesis". When it was discovered that their baby's skull was fractured, David Berg accused Genesis of being a witch, claimed it was her fault, and had these revelations published for all Children of God members, complete with demoniac illustrations of her. It was later found, however, that Hugo had abused the baby in a fit of anger.

There have also been a number of cases of alleged child molestation by Hugo Westphal.

In a 2007 book, "Not Without My Sister, co-authored with two of her sisters, Celeste Jones wrote the following about Westphal:

Eman Artist worked directly with Mo he was treated as special and had the pick of any woman or girl he wanted, He was a short man, overweight, wore glasses, and had already lost most of his hair even though he was only in his early thirties. I had just started to develop breasts and they were tender. Eman liked to come up behind me and feel me up, or wrap his arms around my chest and squeeze me tight. It felt like he was suffocating me.

'You're hurting me,' I would say, as I pushed him away.

'You're just little Miss Queeny, aren't you?' he'd snap back. 'So proud, Queeny,' he would mock, emphasizing the word 'Queeny'. I hated that name. I managed to avoid him for a while, but then the dreaded evening came when he asked me to come to his room for a date. I could not bear the thought of being alone with him. In desperation, I went to my teacher, Sally, and said I couldn't do it.

'He's horrible, pushy and disgusting,' I told her.

'Sweetie, sometimes it can be difficult to share but God gives us the strength to do it. Why don't we pray together?'

She laid her hand on my shoulder.

I listened dejectedly to her prayer, feeling betrayed and helpless. If she was not going to stop it then no one would. She handed me her tape recorder and suggested I play some music and do a dance for the loathsome man. She even escorted me to Eman Artist's room. I hated her. I hated the fact that I was being forced to suck the dick of a perverted, fat man who persisted on pushing himself on me when he knew I hated it. The worst part was the way he gloated. He had power over me and there was nothing I could do about it.

He smirked as he exposed himself. 'Suck me off,' he ordered. Forcefully he pushed my face down on to his penis until I gagged. But although he puffed and groaned, nothing happened. So he asked me to dance for him, directing me to wiggle and rub my bottom in a suggestive way, as he tried to get it on himself. He failed to climax and his impotence made him agitated and more demanding. After what seemed like hours, I stumbled out of his room and cried myself to sleep on my own bed. The assault was over, but the nightmare contin­ued to haunt me for years.[2]

He was eventually excommunicated due to repeated offences of severe physical abuse against women and children, as explained by David Berg below:

47. I guess we'll have to say this year we lost one of our first & best artists. You could hardly believe that a man like that who could draw such gorgeous pictures & be such a marvelous inspired artist could let himself go like that with such a horrible temper & beat up every woman we ever gave him or ever tried to live with him, & threw his children across the room & all kinds of horrible things!--We just couldn't take it any longer, that's all!

48. … That was one of our losses in a way, but let's hope it's not a complete loss & that he'll continue to contribute.--We stood it as long as we could.--Please pray for him! We love him.

50. … Maybe when he gets back home & sees how bad the System is, he'll appreciate the Family more, & at least maybe contribute. So PTL!

In "Not Without My Sister", Celeste Jones recalled another encounter with Westphal a few years after he first sexually abused her:

Another disturbing experience was when one of my childhood abusers, Eman Artist, came from Japan for a visa trip. He asked to speak with me. Seeing him again made me break out into a sweat.

Well, this was good. He was apologizing. Maybe he had changed and things were different now. I was ready to forgive, after all that is what I been told to do. 'Sure,' I replied.

Relieved, he began chatting to me, trying to be chummy. But as he talked, he furtively placed his hand on my thigh.

'You're beautiful,' he half whispered as he bent towards me. 'You've grown up.. .so sexy,' he leered.

I saw the old lust in his eyes. No! He has not changed at all. I could hardly believe it after he had just apologized. I made some excuse of needing to be somewhere and walked off, deeply shaken. I did my best to stay out of sight for the next two days until he left. It came as no surprise when a few years later I heard that he had been officially excommunicated. Finally the bastard had been dealt with. But why had it taken so long? Why had he been allowed to leave a trail of damaged girls wherever he went? His behaviour had been reported by myself and others for years. Surely the leaders bore responsibility for not doing something sooner These questions lingered in the back of my mind.[3]

Westphal was later reinstated and remained in the group until the early 1990s before leaving again. After his final departure, The Family has regularly hired him to continue artwork from outside the group.

On the GPU front, Eman Artist, who has been out of the Family for five years, is beginning to work on more artwork for our pubs. "A man's gifts make room for him," and because of our need for more art, the Lord indicated through prophecy that we should use his services.