From XFamily - Children of God
Jump to:navigation, search
CAUTION: This article contains explicit text and/or images that some may find disturbing or offensive. 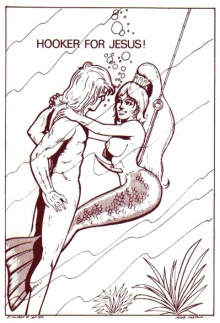 Flirty Fishing (FFing) was a form of religious prostitution practiced by the Children of God/The Family cult from 1974 until it was officially discontinued in 1987 (due, in part, to the AIDS scare). Its etymology can be traced to Matthew 4:19 where Jesus says "Follow me, and I will make you fishers of men."

Flirty Fishing was a subset of The Family's love bombing activities and involved the use of sexual attraction and intercourse to win converts and favors. Female members were told to be "God's whores" and "hookers for Jesus", and soon after its launch as a method of witnessing, sex was given to complete strangers in combination with a request for a "donation", or for a required fee in line with Escort Servicing (ESing) or freelance ESing. FFing and prostitution was widely used as a way to raise money for the cult and resulted in many of the second generation births (known as "Jesus Babies"). Internal Family records from 1988 indicate that over 223,000 "fish" were loved sexually between 1978 and 1988.

The Family describes the practice of Flirty Fishing as follows:

In the latter part of the '70s and early '80s, [David Berg], responding in part to the sexual liberality of that time period, presented the possibility of trying out a more personal and intimate form of witnessing which became known as 'Flirty Fishing' or 'FFing'. In his Letters at that time, he offered the challenging proposal that since 'God is Love' (1 John 4:8), and His Son, Jesus, is the physical manifestation and embodiment of God's Love for humanity, then we as Christian recipients of that Love are in turn responsible to be living samples to others of God's great all-encompassing Love. Taking the Apostle Paul's writings literally, that saved Christians are 'dead to the Law [of Moses]' (Romans 7:4), through faith in Jesus, [Berg] arrived at the rather shocking conclusion that Christians were therefore free through God's grace to go to great lengths to show the Love of God to others, even as far as meeting their sexual needs.

In The Family's internal FF Report Questions & Answers! (PDF), the following description is given:

Q: "What is FF'ing?" Many of you asked for a definition and what should be reported as actual FF'ing.
A: We would like to answer that FF'ing is going out witnessing the love of Jesus with the serious intent to use sex or sex appeal as the bait, regardless of the situation or place. This can be anywhere!–On the street, in a park, while going to the local store, in discotheques or in clubs!

In 1995, after extensive research of Family publications and receiving testimony from numerous witnesses, the Right Hon. Lord Justice Sir Alan Ward stated the following about FFing in his judgment of a child-custody trial involving the Family in England:

I am quite satisfied that most of the women who engaged in this activity and the subsequent refinement of ESing, (which was finding men through escort agencies), did so in the belief that they were spreading God's word. But I am also totally satisfied that that was not Berg's only purpose. He and his organization had another and more sordid reason. They were procuring women to become common prostitutes. They were knowingly living in part on the earnings of prostitution. That was criminal activity. Their attempts to deny this must be dismissed as cant and hypocrisy. To deny that the girls were acting as prostitutes because "we are not charging but we expect people to show their thanks and their appreciation and they ought to give more for love than if we charged them" is an unacceptable form of special pleading. The "FFers handbook" told the girls that fishing could be fun but fun did not pay the bills. "You've got to catch a few to make the fun pay for itself. So don't do it for nothing."

In a trend seen througout the globe, the advent of AIDS wrought changes in the perceptions of the merit of "free sex". The threat of sexually transmitted diseases was the anti-thesis to the gratuitous sexual lifestyle and The Family was compelled to curtail Flirty Fishing in 1987 and all sex with Systemites (non-members) during this same period for multiple reasons.

Coinciding with increased scrutiny of The Family's sexual practices the cult elected to reduce sexual contact with outsiders and reinvent their image to the outside world by shedding the "free sex" image from their hippie past in favor of a more conservative and current image, seeing the AIDS epidemic as a good time to do so.

While this marked a historic juncture in The Family's sexual disclosure to the outside world, it reduced promiscuity within The Family only insofar as to seek to contain contagion.

The following explanation of Flirty Fishing's discontinuation is given on the official Family website:

In 1987 the Family discontinued FFing to emphasize other means of ministering the Word of God to others, as well as to take advantage of opportunities to reach more people than the very personalized ministry of FFing allowed. At that time as well, the plague of AIDS had begun its rampage through the world—another indication that it was time to reconsider Family policy of allowing sexual interaction outside our communities.

Although we no longer practice FFing, we believe the scriptural principles behind the ministry remain sound.

Flirty Fishing and the second generation

Flirty Fishing was responsible for a significant number of childbirths in The Family. Children born as a result of Flirty Fishing were called "Jesus Babies". The Family used a comic book called "Life with Grandpa - Real Fathers", among other publications, to explain some associated issues to the second generation.

Below is an incomplete list of Mo Letters dealing with Flirty Fishing.