True Komix - The Love of God

From XFamily - Children of God
Jump to:navigation, search
CAUTION: This article contains explicit text and/or images that some may find disturbing or offensive. 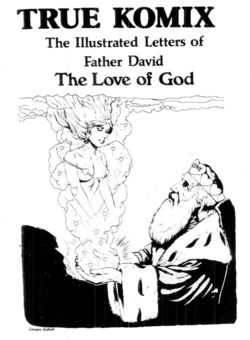 Inside cover. Illustration by Hugo Westphal.

In 1982, The Family published a True Komix (TK) book titled The Love of God. It was the first book published by the organization specifically labelled as "Adults Only". However, from 1978 until 1993, The Family defined an adult as any member 12 years of age or older.

Edward Priebe, who was the head of The Family’s art department in 1981, recalls that:

Berg’s vision was to have all his Letters illustrated as True Komix (TKs) and soon the volumes began coming off the presses. In 1982 Family artists were starting to illustrate the Flirty Fishing (FF) series of Letters, beginning with the King Arthur Letters[1]

Before the Kidz True Komix (KTK) were produced, it was expected that older Family children would read the TKs. Family publications make it clear that David Berg approved and promoted this:

Question: What does Dad think about reading to our children some of the favorite classics that we read as kids, such as "Huckleberry Finn", "Polyanna" & Dicken’s writings etc?–Charity, Pacific.
Answer: Even when I was a kid I thought Tom Sawyer & Huckleberry Finn were horrible! I was amazed at the things they said & did & got away with! They were terrible, terrible kids! I think they’re really corruptive for children or young people to read or watch those stories.... Have your kids read all our True Komix?  —(Answers to Your Questions!—No.8, para. 35 DFO 1566 7/83)

I have thought time & again that some of the stuff I’ve been hearing that the Family is teaching the children, maybe they’re just reaching because they’ve got nothing else, but good night, there are volumes & volumes of True Komix about true stories & true things that God has given us today, for today, why would they go back into that analytical study of ancient [Bible] history?  —(Forget the Past! 8/83 DFO 1598, para. 35)

However, Priebe recalled that when he was assigning the Flirty Fishing Mo Letters and the first graphic comics began coming in, he realized that children should not be reading them. He wrote David Berg and Karen Zerby and was able to convince them that they needed to contain all the Flirty Fishing comics in one True Komix volume, regardless of where the Letters originally appeared in the Mo Letter books. Most Flirty Fishing Letters were in Volume IV (501-600) but there were several throughout later Mo Letter volumes, and a few in the earlier volumes. When the Love of God TK volume was about to be published, Priebe wrote the introduction, warning parents to keep it out of the hands of children. For this reason, the Love of God TK volume is also referred to as the "Adults Only" TK volume.[2]

There were a few FF-related Letters (such as "The Law of Love," 302C) before the official FF series that began with Letter 501, so these had been illustrated as TKs and appeared in earlier TK volumes. When the FF TK volume was compiled, these earlier TKs were included in the new "Adults Only" volume. They were cut out of the regular TK volumes during a Lit Purge some years later. However, after publishing the Love of God TK volume in 1982, in August 1985 The Family published the Pubdex which contained an article titled "Kidz TK & Pub Index for Children's Word Studies" by "Sara and Dora" that contained a section titled "FFING/DANCING" listing Family publications for children on the topic of Flirty Fishing. In addition to reccomending several TKs in the other TK volumes, it also reccomended two TKs, Little Flirty Fishy and The FFing Patriarchs, from the Love of God volume but noted parenthetically that the latter TK was "For Teens only."[3]

According to Priebe, there were about five talks that hadn’t been published as Mo Letters yet and Berg wanted these included in the Love of God book, so barely-edited drafts were rushed to him to give out as assignments.[4] In one Letter, Berg was trying to get Zerby to climax so he had her fantasizing that she was tied to the mast of a ship and being gang-raped by pirates. Then Berg told her, ‘Fuck the demons!’ Some editor had added ‘(Rom.8:28)’ after those words to explain them. The words ‘Fuck the demons!’ were edited out of the final Mo Letter and out of Zebulun Geppetto’s comic. Only the scene of pirates about to gang-rape Zerby was illustrated.[5]

Because of the book’s graphic sexual nature, Family members were ordered to destroy all such volumes in the first Lit Purge sometime in the late 1980s. A June 1991 memorandum stated:

As you know, some years ago we instructed all of our Homes worldwide to dispose of any copies they may still have had of the ‘Dito’ book, as well as the ‘Adults Only’ TK volume.

As a result of this purge instruction, virtually no copies of the book remain in existence. Anyone with access to a copy is enouraged to contact the xFamily.org editors.

DEDICATED TO OUR LOVING FFERS!

God bless you! Here you have it---a True Komix Volume of nothing but FF and Sex Letters---536 pages of beautifully-illustrated fishing lessons by more than two dozen of our best Artists, several of whom are top FFers themselves! PTL!

We have combined all the FF TKs, and TKs of a highly sexual nature, into this one power-packed Volume even though some of the earlier or later TKs will not be in their normal numerical sequence, rather than having them scattered throughout the Volumes amongst all the non-FFing TKs.

Here then, is the entire illustrated counsel of God on FFing in one handy Volume, and we pray it will be a great blessing and a convenience as you study all the different aspects of this Ministry! It also has the added benefit of extra Security, as, with all the "hot" TKs together in one thin book you can easily cache it in some secure place. --And you should keep it under lock and key at all times when not in use!

The FF Letters, and these illustrated versions of them, were not designed for children, so we trust that you will exercise wisdom by keeping this Volume out of their reach until they are sufficiently old and mature to digest many of the deep truths it contains! PTL! "A word to the wise is sufficient!"

God bless you as you read, believe and obey this Volume! Jesus said, "Follow Me, and I will make you fishers of men!" Follow Him today! Immortal souls are waiting for you to show them your love, and the love of the Lord!

— By Hart Inkletter, World Services Editor of Art. [Handwritten in the origina]

— Amen! GBU! – And thanks to allof you who made this Volume possible!– And you dear FFers who put it into practice & make it all possible! – ILY! –D. [Handwritten in the original]