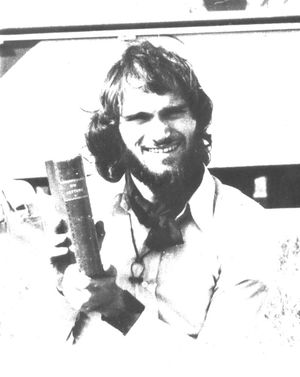 Lawrence Pizzuto (U.S. citizen, also known as Larry, Jonas Milton, and Michael Pizzuto) was one of the first members of the Children of God. Most of his time in the Family has been devoted to the production of Family music. He also appeared on the Bible Album and was in the Paris Show Group. In the late 1990s, he was living in Eastern Europe (Hungary and the Ukraine).

Before leaving the United States on their first trip to Europe, David Berg and Karen Zerby stayed with Larry's mother at her home near Washington, D.C.:

38. BUT WHEN WE CALLED MRS PIZZUTO SHE GAVE US A WARM INVITATION TO COME OVER, and her daughter as well was there at the time and came and met us and just treated us royally, they were so good to us, gave us a delicious dinner every night that we were there, put us in her own bedroom, that beautiful bed and we were just absolutely welcomed so warmly and so beautifully with such loving care and we had such a good visit with your mother, Larry, she was so kind to His Children and I know the Lord will bless her for it.

39. SO WE SPENT THAT WEEK THERE, MAKING THE OFFICIAL ARRANGEMENTS IN WASHINGTON FOR OUR PASSPORTS AND SO ON and repacking our things so that we would not have too much to carry.