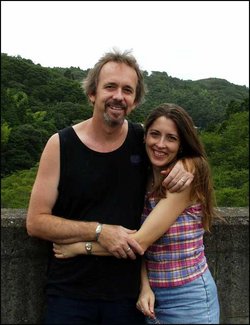 Peter Riddell and his wife "Windy," circa early 2000s

Riddell joined The Family in April 1979. For many years he helped produce and oversee the production of Family video and audio products. Starting in the mid-1980s, Riddell worked closly with World Services (WS), and was in frequent contact with Karen Zerby, the late David Berg, and other top leaders.

On October 17, 1983, Riddell abducted his 17-month-old son Steven Riddell from his mother and fled with the child from Sydney, Australia to the Philippines and then to Tokyo, Japan. In order to leave the country without permission from the child's mother, he allegedly forged the mother's signature and the signature of a non-existent witness on a passport application. On October 18, 1983, a court in Australia granted the child's mother, Julie Riddell sole custody of her son Steven and ordered that he be immediately returned to her. On the same day, Julie Riddell also filed a police complaint and federal police authorities subsequently began an investigation to find her abducted son. Julie Riddell later travelled to Japan with her attorney, Grameme Clarke, to find her son. In December 1983, she found her son in a Family home in Tokyo and was able to exercise her parental rights and return with the child to Australia. The Australian government cancelled Peter Riddell's passport and he was deported to Australia. In 1984, Riddell was found guilty of committing forgery and making false statements to facilitate the unlawful abduction of Steven Riddell. He later returned to Japan, where he lived at The Family's Heavenly City School in Tateyama.

Riddell left Charter Membership in The Family in mid-2005, and currently lives in Australia with his wife "Windy".