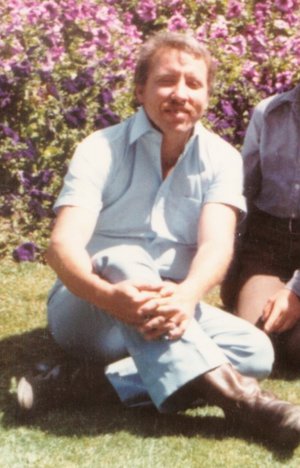 Stuart Harris Baylin (U.S. citizen, aliases include James, Josh and Sam) was born on March 12, 1955 in Brooklyn, New York. He joined The Family in mid-1981 in Austin, Texas. He is a current member of The Family International and has been living in Mexico since September 1993.

In May 1985, he married Ruth Frouman in Corrientes, Argentina and they permanently separated in early 1987. He did not have any children of his own until he married his third wife, Sara, in the mid-1990s. Prior to that union, every single time he impregnated a woman, the result was a miscarriage. According to his own account, one of these miscarriages was the result of him beating and kicking his preganant girlfriend down a flight of stairs.

By his own account, he was violently abusive towards women and children before joining the Family. According to his stepchildren and other sources, this violent behavior continued after he joined The Family. One of his victims has alleged that Stuart Baylin's child discipline and domestic dispute resolution methods resulted in bleeding, black eyes, broken bones, bruises, and severe pain.

Stuart's history of violence against women and children was regularly reported to regional Family leadership as incidents occurred. At least two of his victims reported specific incidents of abuse to top leaders of The Family International and their staff on questionaires completed at the 1987 South American Teen Training Camp held near Lima, Peru. There is no evidence that The Family ever followed its own rules by excommunicating Stuart Baylin for violence against women and children. In fact, after his spouse was expelled from the group 8 months after being diagnosed with breast cancer, The Family refused to return her children and later helped Stuart Baylin abduct and hide them from their parents, other relatives and judicial authorities.

In December 1990, Ruth Frouman filed a complaint with a court in Argentina that Stuart Baylin and The Family refused to return four of her five children. According to a report by the Associated Press, Ruth Frouman alleged that "she was expelled after being diagnosed with breast cancer, which the cult considered a 'Biblical punishment,' and cult members refused to release her four children."

After her death in March 1991, Judge Julio Campora of the Tribunal de Menores de Mercedes (Buenos Aires, Argentina) began an investigation of The Family in Argentina and ordered Stuart Baylin to present all four children to the court. On April 13, 1993 Stuart Baylin and Susan Claire Borowik presented the two eldest children, ages 20 and 17, to the court, but refused to say where the younger children, ages 12 and 15, were located. The two children that were presented to the court were kept in state custody while the authorities searched for their younger brothers.

In May 1993, Stuart Baylin's petition for custody of the Frouman children was denied and the children that had been presented to the court were repatriated to the United States and reunited with their surviving relatives. According to one of the missing children, Stuart Baylin then took them to Montevideo, Uruguay and hid them there until September 1993 when Argentine authorities, still searching for the missing children, raided several Family homes in Buenos Aires, Argentina. Immediately after the September 1993 raids and with financial assiatance from the Family, Stuart Baylin fled with the children to Brazil and then to Mexico. They lived there in hiding for several years until finally in July 1997, the youngest one was reunited with his father and his other surviving relatives.

Neither Stuart Baylin or The Family International has ever provided any evidence that they ever had lawful custody of the Frouman children and that their retention outside the United States was not intended to obstruct the lawful exercise of parental rights.