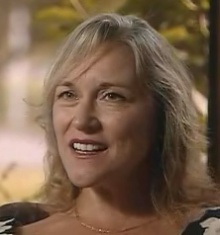 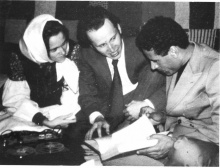 Faith and Jonathan Berg with Muammar Qaddafi, "Guide of the First of September Great Revolution of the Socialist People's Libyan Arab Jamahiriya", 1973.

"Childhood Sex: I like it! It reminded me of how you used to put me to sleep when I was a little girl, 3 or 4. Wow! Daddy did it best! Back rubbin' that is, and front rubbin' too!...Daddy just made me feel good all over and I didn't know why, but it would really put me to sleep with a sigh! Praise the Lord! I don't think it perverted me, none at all, but it sure converted me to his call! So I believe our parents should try it and help our kids to get the natural habit! We pray it'll work, then junior won't be a sexual jerk! It worked for me as you can see, I just do what comes naturally! Oh I could write a book, but this is just a look into my childhood sex!"

From Faithy's reaction to "My Childhood Sex!" (ML 779), as quoted in the Judgment of Lord Justice Ward.

Many first and second generation members who have known Faithy over the years report that she enthusiastically embraced the sexual liberties preached by her father. Some of the most blatant sexualization of children occurred when Faith was a Family leader in Greece with the “Music with Meaning” ministry during the 1970s.

In the mid-1970s, Faith was her father’s envoy to Muammar Qaddafi, among the first generation of Islamicists to challenge U.S. power through state-supported terrorism. Faith returned to Amsterdam to sing Qaddafi's praises to a crowd of 500 young people:

"...I asked if I could use the microphone and the P.A. system of the place and I stood up and said, "I would like to sing a song which is written by a friend and brother of ours, Colonel Godahfi." I didn't know if they would shoot me or what, if they were Zionists or what they were. So I asked our group to play the music and we started singing, "Allah, Allah," and I would raise my hands to draw their attention to what we were singing about. At the end of the song many were lifting their hands with us and singing with me and we would sing it over and over again."

From "MO Meets Mo’amar Godahfi!" (ML 394), which has since been ordered purged by The Family.

With the Reorganization Nationalization Revolution (RNR) in 1983, a series of dressings-down and "re-education" sessions began Faithy’s decade-long purge from her father’s inner leadership circle and removal from the line of succession to his throne. The Mo Letter "You Must Obey the Least of These Commandments!" (ML 1827) – castigation for the supposed sin of sun-tanning – was the beginning of Faithy's public humiliation. 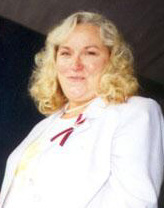 Faithy reportedly has had a serious drinking problem for many years. Despite this, she initiated a humanitarian aid effort under the auspices of Family Care Foundation in the early 1990s. By 1998, Project Aid/Siberia was chosen to distribute several million dollars in commodities from the U.S. Department of Agriculture to the people of Novosibirsk, Russia. [1] However, after Archpriest Alexander Novopashin of the Russian Orthodox Church complained [2] about Faithy using a US- government sponsored organization to spread her fathers' doctrines, she was confronted by Steven Kelly in 1999 and dispensed from any official role in The Family International.

Faith has been accused of sexually abusing children during the 1980s. Some of those who attended the Mexico Teen Training Camp in July/August 1986 have alleged that she sexually abused teenage boys who were attending the camp. In a self-published book, Sam Ajemian noted some of the allegations against her:

Grant Montgomery (aka Hosanna, aka Gary, aka Paul Papers) and Berg’s daughter Faithy were in charge of this gathering. To set the climate for the rest of the story, it would help to share some of what Aaron (see chapter 3), who was at the Mexico TTC, told me. He said that during this very gathering Faithy was having sex with 16- and 17-year-old minors. An adult member, Damaris, told Aaron that Berg had commissioned Faithy to have sex with the older teens as a gift from Berg to them! Aaron said he is sure that Faithy had sex with 16-year-old R. She danced nude for him, performed oral sex on him, and they had intercourse. Another teen of about R’s age, DS, told Aaron that he also had sex with Faithy. She was having sex every night and, for the most part, with teens. Quite a few older teens as well as adults were going into Faithy’s room and everybody knew what was going on. This is the meeting where supposedly Montgomery and Faithy discovered through these questionnaires that these things were going on, and here is Faithy doing the very things that they supposedly discovered! (It is true, however, that sex between adults and teens 15 and under was not allowed during the Mexico TTC.)

However, despite credible allegations against her, she has not been charged with or convicted of any criminal offense related to child sexual abuse and thus is presumed innocent until proven guilty in a court of law.

This section is a "stub". This means it is incomplete and needs further elaboration.

You can help by contributing information. Please use the Forum to send us content whenever possible.