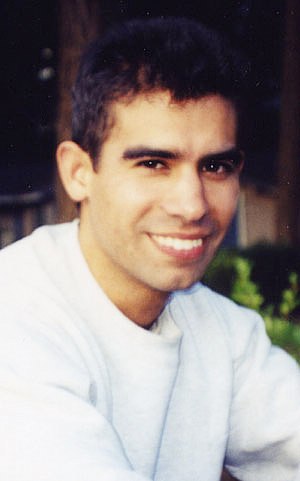 Richard P. "Ricky" Rodriguez (also known as Davidito and Pete) was born 1975-01-25 on the island of Tenerife in the Canary Islands of Spain to Karen Zerby and "Carlos" (a Hotel Belair in Santa Cruz de Tenerife employee Zerby FFed).

His mother, Karen Zerby, was the companion of David Berg (1919-1994), founder and leader of the Children of God / The Family, a high-demand, highly sexualised, apocalyptic religious movement. Nicknamed Davidito (his birth name was David Moses Zerby, later legally changed to Richard Peter Smith), Rick spent his childhood and early adult years living and travelling with his mother and Berg in Europe, Asia, and Canada. He was considered to be the adopted son of David Berg although no official adoption ever took place. He is also the half-brother of Techi.

From his birth, David Berg and Karen Zerby determined to make Rick a poster boy for their followers. He was, according to them, a divine prince, destined to lead the Children of God through the biblical end-time. As such, they felt that Rick must be moulded into an ideal follower, an incarnation of their beliefs and practices. His upbringing was exhaustively documented and highly publicized as a model for all parents in The Family to follow. As a result, Rick's childhood and youth was spent in a highly controlled environment characterized by intense indoctrination, stringent discipline, and sexual initiation by adults.

As Rick grew up he developed a deep-seated resentment towards Berg and Zerby because of the sexual abuse he had suffered as a child due to their policies and because of the unnatural way in which he was raised. He would later state that he and his sister were never allowed to be "just children", but always had to perform and demonstrate their supposed natural superiority to other children in the group.

In his late teens, Rick began rebelling against his mother's beliefs and practices. In early 2001, he and his fiancée Elixcia Garcia made a final break with his mother (who had become the leader after Berg's death) and The Family, declaring to her that "we cannot continue to condone or be party to what we feel is an abusive, manipulative organization that teaches false doctrine. . . . You have devoured God's sheep, ruining people's lives by propagating false doctrines and advocating harmful practices in the name of God, and as far as I can see, show no regret or remorse." [1]

Rick and Elixcia, now married, settled in Washington State, hoping to put the past behind them. However, Rick became increasingly consumed by rage over the abuse that he and many hundreds of other children raised in The Family had suffered. Deeply depressed, he felt that his mission was to find his mother and bring her to justice.

In October 2004, he moved to Tucson, Arizona and worked as an electrician. According to accounts by his friends and relatives, he moved there because he heard his mother had visited and he wanted to find her. In January 2005, he arranged a meeting with a long-time Family Member and close associate of his mother, Angela Smith (formerly Susan Joy Kauten), and stabbed her to death in his apartment. He then drove to Blythe, California where he shot himself in the head. He released a videotape to be distributed to friends, family and former members explaining his actions. In this video, Rick says he saw himself as a vigilante avenging children like him and his sisters who had been subject to rapes and beatings. "There's this need that I have," he said. "It's not a want. It's a need for revenge. It's a need for justice, because I can't go on like this."

Ricky Rodriguez's murder–suicide received considerable international media coverage, including the examples below. A larger collection of press coverage can be found at Category:Press.