Free of cult's clutches to tell their harrowing story 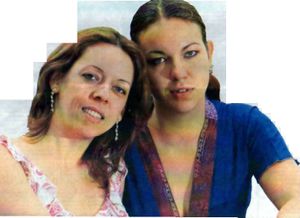 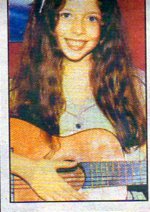 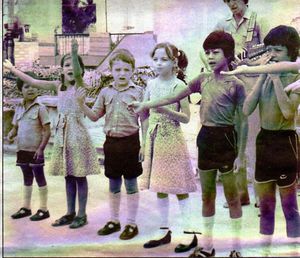 Innocence lost: a show put on by young members of the Children of God, with Kristina fourth from the left. 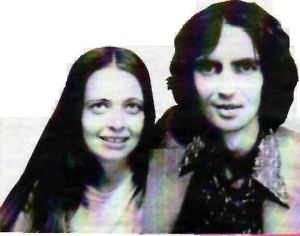 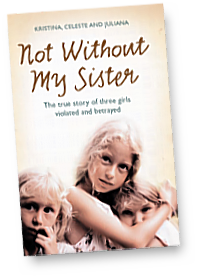 Innocence lost: the cover of the sisters' book 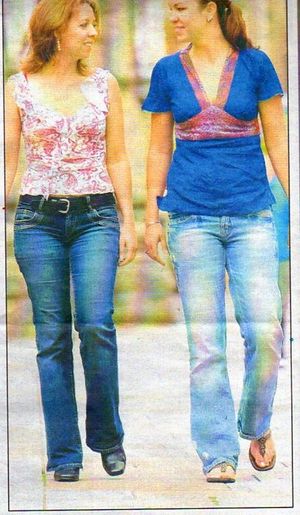 Innocence lost: Celeste and Juliana stroll through the streets of Bristol this week.

A new book has lifted the lid on one of the most secretive and abusive religious cults of recent decades. Woman's editor Susie Weldon talks to Bristol-based sisters Celeste Jones and Juliana Buhring about their traumatic upbringing in the Children of God

The girl smiles and blows kisses at the video camera as she sways her hips and wriggles seductively, allowing the white veil that covers her naked body to fall to the ground.

This sexy striptease is meant to "glorify God", although most people would consider it a blasphemy. But what's even worse is that it's being performed by a six-year-old child.

The video, one of many made on the orders of David Berg, controversial founder of the Children of God sect, still exists and its star, Celeste Jones, now aged 32 and living in Bristol, says what's striking is the "knowing-innocent" look in her eyes.

For Celeste, like other children born in the sect, was systematically abused - physically, mentally, emotionally and sexually - from the earliest age.

"I was innocent - but I was learning what turned men on. The only positive attention we received from adults was when we did what they wanted, acted flirtatiously or were sexy," she recalls.

"We would be rewarded for being 'yielded' and showing God's love. Being stubborn, saying no or being prudish was of the Devil and bad, and would get us in trouble."

Now Celeste and two of her sisters, Juliana Buhring and Kristina Jones, have written a book about their traumatic childhood and their eventual escape from the Children of God.

Not Without My Sister (£12.99, HarperElement) is the devastating account of what happens when one individual's obsessions, beliefs and sexual perversions are allowed to dominate an entire community of people.

It offers an extraordinary insight into one of the 20th century's most notorious cults, whose "Law of Love" (God equals love and love equals sex) not only made it mandatory to "share yourself" with everyone else in the community, but also led to "flirty fishing", the practice whereby women were sent out to prostitute themselves in order to attract more followers.

The book is hard to read at times because it's difficult to understand how loving parents could collude in such abuse.

It's also hard to appreciate how intelligent, rational people could fall under the spell of an obsessive such as Berg: some of his "prophesies" are ridiculous, even laughable, but he exerted an extraordinary control over thousands of people.

Juliana explains: "It's difficult to wake up and realise your entire life has been spent living someone else's lie; that you've been kept from living your own dreams in order to keep the manic delusions of one man alive.

"It's like believing you were born blind because you have spent your whole life blindfolded. Then when you suddenly do see, you cannot understand what it is you are seeing."

However, this is also a story of immense personal courage and hope, as each sister in turn fought her own battle to leave the cult and to develop a life in the outside world.

Although they share the same father, they have different mothers and were not brought up as a family. Their father, Christopher Jones (who uses the biblical name Simon Peter), was the son of a British military officer and educated at private school in Cheltenham.

He has fathered 15 children by seven women, and is still a member of the cult, now called The Family (see panel below).

Celeste and Kristina's mother, Rebecca Jones, became a member aged 16 but left the cult in 1984 and managed to kidnap Kristina, then aged 12. Juliana's mother, Serena Buhring, joined while travelling as a hippy in India, and is still an associate member.

I met up with Celeste and Juliana in Bristol to discuss their book: the sisters share a home in the city's Kingswood area, with Celeste's daughter Cherie, who will be nine next month, while Kristina lives in Nottingham.

Living together is in many ways the fulfilment of a dream. As children they longed to be together as a family, and the title of their book, Not Without My Sister, refers to their determination to rescue each other (and their other siblings) from the cult.

But there's also a tragic poignancy about it. The book is dedicated to the one sister who will never be able to join them - Davida died in 2005 after years of severe depression and drug addiction.

In person, Celeste and Juliana show no outward sign of their traumatic childhood; they're both beautiful, slender, graceful women who speak with searing honesty and astonishing openness about the abuse they suffered.

But both have been terribly scarred by their ordeal and feel a responsibility to tell the story of what really went on. Celeste, in particular, wants to set the record straight because she was used as propaganda for the cult when she was 18, and persuaded to say she'd had a happy childhood.

Juliana began writing the book to try to make sense of her childhood, which was full of beatings, starting from the age of three when she used to wet her bed. Then, when she was six, she was sent to the Jumbo, a huge boarding school for cult children, in the Philippines.

It was a brutal place where "speaking out of turn" was viciously punished: you could tell who'd just been beaten by the bloody purple welts on their bottoms in the shower, she says.

Other children were given "silence restriction". They had to walk around with a notice around their neck banning people from talking to them; some also had their mouths taped up.

She is haunted by the memory of one eight-year-old boy. "He had expressed a desire to leave The Family, and so was imprisoned in a tiny room with an adult guarding him at all times," she recalls.

"They fed him only liquids and read him Mo Letters [missives from the leader] all hours of the day and night for nearly a year. As he was close in age to me, I often found myself thinking about him and wondering what I would do in his place."

Juliana spent years feeling worthless, and tried to kill herself as a teenager more than once: "I felt if no one loved me, then why was I in the world?"

Meanwhile, Celeste suffered years of sexual abuse, having been taught to fondle men and being forced to accept their caresses from the age of five or six: "It was hard to access those childhood memories and feelings for the book," she says.

She admits she does not know if she will ever be able to accept that a man truly loves her. But both say writing the book has been enormously cathartic: "I feel quite light and relieved now that it's all out of me," says Juliana.

One of the hardest aspects of growing up in the cult was having to suppress their feelings all the time. They lived in fear of expressing the wrong thought or doing the wrong thing: "You weren't allowed to express any doubts or criticism. That was called 'murmuring'," says Juliana.

"Our whole life was about suppressing that inner voice that said, 'this is wrong'."

"She's so outgoing that she makes friends with everyone," says Celeste, who begins a job as a family project worker in September and hopes eventually to become a clinical psychologist. "I do feel I kind of live my childhood through her, because mine was stolen from me.

"I'm so happy when she gets things and perhaps I'm a bit self-indulgent," she smiles, as Juliana laughs and says: "Yes!"

It was her daughter who gave Celeste the impetus to leave the cult: "I couldn't have her abused as I was." Meanwhile, after years of being punished for being a rebellious child, Juliana, who is studying philosophy and psychology and pursuing a career as a writer, finally could not suppress her sense that something was terribly wrong with the cult.

Leaving the cult and their family and friends was "absolutely terrifying".

They had no identity in the outside world; no national insurance number, no bank account. It helped, however, that Kristina and Rebecca were already on the outside.

The sisters have now set up an organisation, Rise International, which works to protect children from all forms of abuse in isolated or extremist cults.

"The Catholic Church has just made a formal apology and paid restitution for the sexual abuse which took place in Los Angeles, but The Family has never done that and the former abusers who are paedophiles are now in leadership positions," says Celeste.

Meanwhile, the sisters are rebuilding their lives - and relishing their liberty, says Juliana: "Just to be your own boss, sit down in a cafe if you want to - I think only someone who's been imprisoned can understand what that sense of complete freedom is really like."