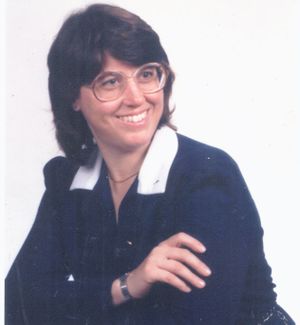 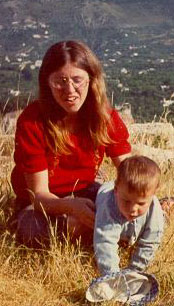 Ruth Frouman (aka Adoraim Green and Rosa) was born on September 30, 1953 in Elmira, New York. She joined the Children of God in August 1971 in Ellenville, New York. Three of her 10 siblings also joined the Children of God and were members during various periods in the 1970s and 1980s. On April 15, 1972, she married her first husband (known as Andrew Green and Onesimus in the cult) and from 1973 until 1980, they had five children, all boys. In September 1981, she divorced her first husband after he decided to leave the Family and she decided to stay in the group. In March 1984, she moved to Corrientes, Argentina with her five children and Stuart Harris Baylin. In December 1986, she was diagnosed with breast cancer. Although the Family allowed her to receive radiation treatments in Buenos Aires, Argentina, they were opposed to the surgery and chemotherapy that doctors reccomended to save her life. They tried to persuade her to stop getting treatment and to instead trust in God to heal her breast cancer. In May 1987, she unsuccessfully tried to leave the Family with her three youngest children. After her unsuccessful attempt, she was held in isolation in a warehouse in Corrientes, Argentina by Stuart Baylin and others. Some of her children have alleged that, during her stay in this warehouse, she was mistreated, required to fast, and psychologically tormented and terrorized until she had a mental breakdown.

In July 1987, she was kicked out of the Family and sent to the United States without any of her children. According to her relatives, she arrived in Miami so disoriented and traumatized by her ordeal that she was detained by airport security until her mother and her brother arrived to take her home. After arriving in the United States, she immediately received treatment (including surgery and chemotherapy) for breast cancer. Later, she got a job as a secretary and attended Chattanooga State Technical Community College. In November 1988, her second eldest son, Peter, returned to the United States to visit her and his father and decided to live with his parents and relatives rather than returning to the Family. Her other four children remained in the Family.

After many unsuccessful attempts to find her children and persuade Stuart Baylin and the Family to return them, in October 1990, she traveled to Argentina to see them. She was allowed to see them briefly in Mar del Plata, Argentina but she was not allowed to take them home with her as she planned. In November 1990, with assistance from her sister and brother-in-law she filed a complaint with a court in Argentina seeking the return of her children.

According to a report by the Associated Press, Ruth Frouman alleged that "she was expelled after being diagnosed with breast cancer, which the cult considered a 'Biblical punishment,' and cult members refused to release her four children." Her complaint was ratified on December 12, 1990 by the Tribunal de Menores de Mercedes in the province of Buenos Aires, Argentina as "Causa 32.202- menores Frouman E. y otros s/ Inf. Art. 10- Ley 10.067."

Ruth Frouman died on March 12, 1991 at Erlanger Hospital in Chattanooga, Tennessee. She was buried in the Dunlap Family Cemetery in Liberty, Kentucky. The Family did not allow her four children that remained in the Family to attend her funeral and did not inform them of her death until many months later.

After her death, Judge Julio Campora of the Tribunal de Menores de Mercedes started an investigation of the Family in Argentina and ordered Stuart Baylin to present all four children to the court. On April 13, 1993, Stuart Baylin and Claire Borowik presented the two older children to the court but refused to say where the younger children were. In May 1993, the two older children were repatriated to the U.S. and went to live with their father and other relatives. The Argentine authorities continued to search for the two youngest missing Frouman children and on September 1, 1993, Argentine police raided Family homes in Buenos Aires Argentina in hopes of finding the missing children there. They were unable to find them because in May 1993, Stuart Baylin fled with the children to Montevideo, Uruguay. After the September 1st raids and as police officers were checking Family homes in Montevideo, Stuart Baylin again fled with the children to Brazil and later to Mexico. In 1996 and 1997, the missing Frouman children were finally reunited with their siblings and other relatives.

In the days that followed the raids, lack of evidence did not stop reporters from quoting wild rumours, ranging from "Satanic rituals" and "salvation-for-sex" (source: CAN) to child sex and selling "secret" videos to rich businessmen (source: Edouardo Lausse, an Argentine backslider, whose Bible name was "Benjamin Amor", who was interviewed on Spanish CNN.) Jose Maria Baamonde, head of SPES Foundation (the equivalent of CAN in Argentina) was also quoted, and even ex-Member Ruth Ellen McKee/Frouman, who died two years ago, was quoted as though she were alive, making kidnapping charges and demanding the Family return her children.