From XFamily - Children of God
Revision as of 19:05, 13 January 2007 by Monger (talk | contribs) (undo inconsistent use of "nineteen" vs. "19" (which appears as an age in the previous sentence) ....most articles currently use numeric symbols for two-or-more digit numbers)
(diff) ← Older revision | Latest revision (diff) | Newer revision → (diff)
Jump to:navigation, search
A checked version of this page, approved on 18 August 2008, was based on this revision.

James Penn is the best known pseudonym of a former Family member also known as Gideon Valor, Felipe, Jay, Ray, and Phil. He joined The Family, in 1971, at age 19 and spent 27 years in the group before leaving in August 1998. 19 of those years were spent in World Services. 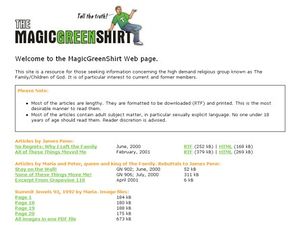 In 2000, Penn set up a Website (archived below) which he titled after the "Magic Green Shirt" Mo Letter. In his posted articles, he wrote of some of his experiences during his time in World Services.

Articles by Zerby and Kelly, queen and king of The Family. Rebuttals to James Penn